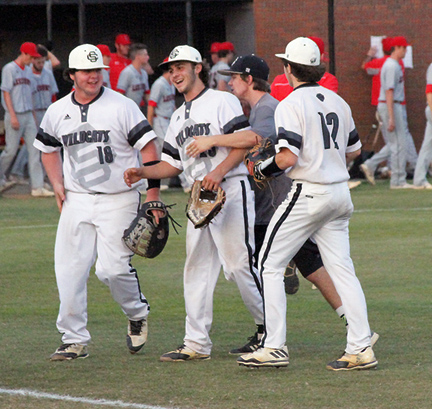 MICHAEL MURRAY I ATR: Schley’s Chase Patrick (center) celebrates with his teammates after striking out the final Lee County batter in the Wildcats’ March 29 tilt against the Trojans.

The Schley County Wildcats have had a busy week on the baseball diamond.
The Wildcats have pulled in a series of wins over various foes over the past 10 days, beginning with a rematch against Deerfield-Windsor (DW) in Ellaville. Having previously suffered one of the Schley team’s two losses at the hands of the Knights, the Wildcats took advantage of their home-field advantage on March 23 to take a 7-6 win over their AAA opponents in the teams’ second meeting of the season.
The Wildcats then hosted Mt. DeSales Academy (MDS) on March 27 and defeated the Cavaliers 6-2 in another non-region tilt. Following this win, the ‘Cats hit the road for Montezuma to take on the Macon County Bulldogs. The Schley crew rode the momentum of their previous two victories as well as a grand slam off of Ashton Goodin’s bat to shutout the Bulldogs a 15-0 in a three-inning scorefest.
The Wildcats capped off their week-long win streak with a 2-1 defeat of the Class AAAAAA Lee County Trojans in a heated test of the teams’ skills on March 29 thanks, in part, to a stellar performance by Schley pitcher, Chase Patrick, who tossed seven innings and accounted for both of the team’s RBIs in the contest.
The Wildcats hit the diamond again on March 31 to battle the Manchester Blue Devils. The results of this tilt were not available at press time. As of this writing, the Wildcats enjoy an overall record of 16-2. The ‘Cats are currently undefeated in Region 4-A after 10 games. 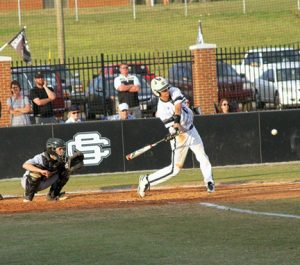 MICHAEL MURRAY I ATR:
Schley’s Ashton Goodin takes a powerful swing during the Wildcats’ March 29 tilt against Lee County in Ellaville. Goodin contributed a grand slam to the Wildcats’ shutout of Macon County the previous afternoon.

The Wildcats fell behind early on in the team’s match-up against the DW Knights, with the hosts plating one runner in the second frame and the visitors answering with four runs in the top of the third. DW added another in the fourth and the ‘Cats cut their lead by two runs in the bottom half. Both teams tacked on another in the fifth and the Wildcats pulled to within one by adding another in the sixth. Schley entered the bottom of the seventh one run down and plated a pair of runners to seal the victory.
Jordan Hall led the Wildcats’ batters, contributing two RBIs to the win. Patrick spent four innings on the mound for the ‘Cats, striking out five batters along the way before ceding the mound to Dylan Windham.
Four days later, the Wildcats hosted the MDS Cavaliers, looking to extend their winning streak by one more game.
With Schley down 2-1 coming into the bottom of the fourth, the Wildcats pulled ahead by plating a pair of runners. The Wildcats added three more insurance runs in the latter half of the following frame to seal the four-run victory.
Reid Ragsdale led the Wildcats from the plate with two hits in the tilt. Patrick added one RBI. Will Barry, Goodin, and Patrick split duties on the mound, with Barry striking out five batters.
The Wildcats jumped out early the following afternoon in the match-up against the Macon County Bulldogs, tossing three runs on the board in the first stanza. Schley added six more runs in each of the following two frames, propelled by Goodin’s grand slam to walk away with a 15-point run-rule shutout.
Schley’s Wade Law collected three hits in the game, followed by Goodin and Patrick, who each connected on two.
Goodin brought home five RBIs in the game. Cameron Becher brought in three runners and Patrick followed with a pair.
Chance Holloman tossed all three innings for the ‘Cats, dispatching five batters along the way.
The week’s action concluded with a bitter match between the Wildcats and the Lee County Trojans on March 29.
The Wildcats felt like they had something to prove against the Class AAAAAA Goliath team and it showed in the team’s determined performance.
The scoreboard remained unused in the initial two innings, with Patrick having logged five strikeouts from the hill before the Wildcats entered the dugout in the bottom of the third. The first inning was highlighted by an exciting play by Schley catcher, Jarrod Wall, who managed to fire the ball to second base and pick off a runner attempting to steal. From the visitors’ perspective, a double play in the second inning kept the Lee County fans cheering. 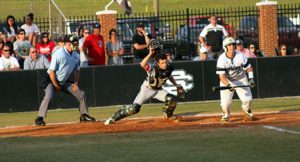 MICHAEL MURRAY I ATR:
Schley’s Jarrod Wall offers up a sacrifice bunt during the Wildcats’ March 29 contest against the Lee County Trojans in Ellaville.

Goodin opened the action by converting a full count to a walk and Ragsdale followed with a double to deep centerfield. With two outs on the board and runners on second and third, Patrick nailed a clutch single to give Ragsdale and Goodin plenty of time to complete their round trips and put the home team up 2-0.
The Trojans threatened in the top of the fourth with the bases loaded and only one out on the board, but the threat was neutralized by another strikeout from Patrick and a deft catch by Ragsdale.
In the top of the fifth inning, the Trojans made their move once more, this time exploiting an errant pitch to bring in a runner from second base and cut the visitors’ deficit in half. The Trojans then proceeded to load the bases once more, but Schley second-baseman, Clint Sellars caught a pair of fly balls to send the visitors back into the field.
Neither team gave an inch in the following inning and the Wildcats eventually cinched the win as Patrick struck out two more batters in the bottom of the seventh and Sellars snagged a hard drive down the middle out of midair.
Patrick went the distance for the Wildcats from the hill, pitching all seven innings and striking out nine Trojan batters. Patrick also connected on two hits in the match and brought home the game’s only two RBIs. Ragsdale connected on a pair of hits in the game as well.
Goodin added one hit and one walk. Wade Law drew one walk as well. Belcher was hit by one pitch.
The Schley crew will return to action on April 3 with a 6:00 tilt at Georgia Southwestern State University’s Hurricane Stadium in which the Wildcats will take on the Georgia Military College Bulldogs.