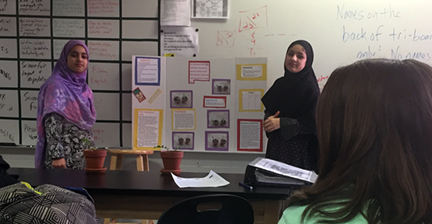 AMERICUS — Furlow Charter School scholars in Rob Bailey’s science classes performed a variety of experiments working alone, in pairs, and, in some cases, as trios. The experiments ranged from talking to plants, to learning about phone radiation, to how much milk a cookie holds, and even how electricity travels through wires, liquids, and other substances.
The advisors for each class chose the top six projects using a grading rubric. The top six were then placed on display in the media center at Furlow where four different judges from the community came in to narrow the entries to a top three.
The judges were Paul Augood, Ph.D., Tzevetelin Iordanov, Ph.D., Svilen Kostov, Ph.D., and Brandi Lunneborg.  They each dedicated about two hours sifting through the 24 entries. In the end their results were shared with the school and ribbons were conferred.
Sixth-grade winners were Edmund Chen, Edwin Gonzalez, and Romay Villarosa. The second-place winners in sixth grade were Joseph Malphurs, Riley Herron, and Harley Parker.  The third-place winners for sixth grade were Brooklyn Hinton, Alyssa Ekkel, and Vanesa Aguire. Seventh-grade winners were: first place Alan Howard, second place Brianna Bloodsworth, and third place Noah Felton and Andy Kuipers. Eighth-grade winners were Selena Ippolito, Rebecca Elswick, and Maya Wynn. Second place for eighth grade was won by Mallory Meeks and Lizzie Dickerson. Kalsoom and Sumiya Bibi took third place.  The ninth-grade winners included Heather Thornburgh and Avalyn Jones with second place going to Moses Simmons and Sharon Bullons with Victoria Batts and Tensley Hall finishing third.
The top three finalists’ projects from grades 6 through 9 will be submitted to the Darton (ASU) Fair and then to the Science Fair in RESA.
This was the first year the scholars completed projects for the Darton (ASU) Fair and a great deal was learned about science and the scientific method.