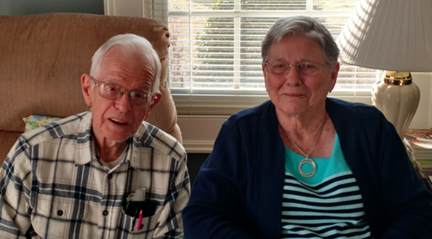 Wayne and Eleanor Shannon live at the Sumter Retirement Village in Plains, Georgia. Mr. Shannon is 90 years old, and Mrs. Shannon is 91, and they have been married for 70 years. Today they may live a quiet life watching T.V. and going to church on Sunday, but that wasn’t always the case. As with most people they have a story to tell, and their life has been an adventure.
Wayne Shannon was born in Date City, Florida, but he didn’t stay down there for very long. Just after he completed the first grade, he moved up to Preston, Georgia. His grandparents still lived in Florida and he would go visit them on occasion. When school would let out on Fridays, his parents would take him to the train station and pin his name and destination onto his shirt and off he’d go on a three-hundred-and-fifty-mile train ride. When his visit with his grandparents was over, they’d simply reverse the process and send him back on the train.
Wayne Shannon is a veteran of the Second World War. He enlisted in the Navy in December, 1944 and was sent to Bainbridge, Maryland for basic training. After completing his training, he was sent to serve on board the USS Tryon, where he kept records for the engineering section. The Tryon was an evacuation transport ship that carried troops and cargo to support the war in the Pacific, but would also serve as a hospital evacuation ship when needed. The Tryon was in Guam the day that Japan surrendered, but would quickly make its way to Yokohama, Japan. There the ship picked up liberated Allied POWs and took them back to the Philippines. During the trip back to the Philippines, Mr. Shannon helped the men write letters back home to their loved ones. Mr. Shannon finished out the remainder of his tour, and was discharged in July of 1946. When asked about his service Mr. Shannon said, “I’d do it all again.”
After his time in the Navy, Mr. Shannon met Eleanor and the two were married in 1946.  She had attended Georgia Southwestern, where she earned a degree in business. During the war, she worked as a clerk at the Army Hospital in Thomasville. The hospital closed down after the war, and Eleanor went to work as a school teacher for the next five years. After teaching school, she went to work for Jimmy Carter during his first run for Governor of Georgia. Then she went to work for the state and retired with 25 years. Mr. Shannon worked for the post office, where he eventually became the state President of the National League of Postmasters. Mr. Shannon’s job with the post office also allowed the two to travel to several state and national conventions. He would eventually retire with 30 years.
Along the way they had two daughters, six grandchildren, and nine great grandchildren. Mr. Shannon even found time to build a home for his family with his own two hands, and without the aid of power tools. Later in life, Mr. Shannon would survive a battle with cancer. In the end the two have lived a long, and eventful life.