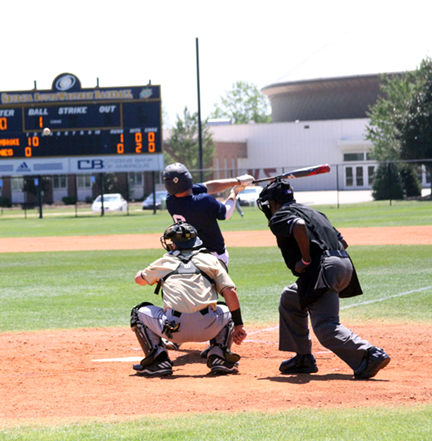 MICHAEL MURRAY I ATR: GSW’s Dakota Long sends a shot towards the centerfield fence during game three of the Hurricanes’ April 2 series closer against UNCP.

AMERICUS – The Georgia Southwestern State University (GSW) Hurricanes kicked off a three-game series on April 1 with a 9-8 victory over the University of North Carolina Pembroke (UNCP) Braves. The Braves bested the Hurricanes in the final two games of the series, taking 7-5 and 8-6 wins.
Following these matches, the Hurricanes enjoy a 13-20 overall record. The GSW crew is currently 6-9 in Peach Belt Conference action.
The Hurricanes trailed early in game one of the weekend series, taking a 4-1 deficit into the bottom of the fourth frame. GSW’s Jonathan Martin, who had previously scored off a Jared Jones single in the first frame, lit up the scoreboard for the Hurricanes with a grand slam homerun. Martin’s base-clearer brought in Alex Kranick, Andy Moore, and Josh Logan to put the hosts up 5-4.
UNCP retook the lead in the top of the seventh frame, plating a pair of runners with a two-run homer by Jarrett Mobley and repeated this performance in the top of the eighth with a Nolan Pierce dinger to pull ahead 8-5.
When the ‘Canes returned to the dugout, Bradley Hough exploited a UNCP error to reach first base and put the gears in motion for a GSW comeback.
Evan Alderman followed with a single to the right side to push Hough to second base before Martin picked up his bat once more and blasted a single down the right side, allowing Hough to come home.
Zach Barron then added his second double of the game to advance Martin to third and plate Alderman. GSW’s Dakota Long capped off the rally with a single to centerfield that brought in Martin and Barron and gave the Hurricanes a 9-8 edge heading into the final inning.
Mitch Holloway stepped up to the mound to toss the final inning and secure the win for the Hurricanes.
Kyle Spinks opened the game on the hill for the Hurricanes, striking out one batter in seven innings of work. 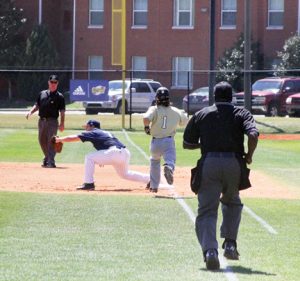 MICHAEL MURRAY I ATR:
GSW’s Jared Jones reaches out to snag the ball and dispatch a UNCP runner on April 2 at Hurricane Stadium in Americus..

Matt Hubbard is credited with the win after taking over hurling duties in the seventh inning. Holloway threw the ninth frame.
Martin led the Hurricanes’ batters in the win, collecting three hits on five at-bats and contributing five RBIs.
Kranick connected on three hits in the match as well, contributing one double. Barron made it to second base on both of his connections in the game and brought in one runner. Long added a pair of RBIs on his sole hit of the contest.
Kranick, Jones, and Barron were each credited with double plays in the game.
The Hurricanes returned to the field the later that afternoon to battle UNCP in game two of the series.
The ‘Canes got off to a promising start in the first inning when Barron singled to left field, bringing in Martin and Kranick.
The Braves added runs in the second, third, and fourth frames to take a slight lead and added another two in the sixth for insurance. By the bottom of the ninth stanza, the UNCP crew had amassed a 7-2 advantage.
GSW’s bats came to life in the final inning, after Clay Patrick opened the frame with a walk. Kranick then singled, advancing Patrick, and Alderman reached on a fielder’s choice. Kranick was dispatched in the play, leaving two runners on base.
When Martin stepped up to the plate, he belted a double to complete his teammates’ round trip before taking advantage of a throwing error to come home and bring GSW’s game total to five runs.
GSW’s Dylan Brown is charged with the loss after pitching five and one-third innings. Brown struck out two batters in his time on the hill. Coty Graham wrapped up the sixth inning before ceding the mound to Andrew Patrick, who completed the game. A. Patrick and Graham each struck out one batter.
Kranick, Long, and Logan each contributed a pair of hits in the match. Barron batted in two runners while Martin and Jones each added one RBI.
The following afternoon, the Hurricanes hit the diamond once more in an effort to break the series tie, but fell victim to a seventh-inning rally from the Braves to take an 8-6 defeat.
UNCP put a run on the board in the initial frame, but the GSW crew pulled ahead in the second when Moore came in on a Kranick single. Alderman then connected on a shot to right field, scoring Logan.
The scoreboard was quiet for the following two innings, but UNCP broke the silence with a run in the top of the fifth. GSW added another run in the latter half of the frame when Martin nailed a double that brought in Kranick and preserved the Hurricanes’ lead.
UNCP pulled ahead for the final time with four runs in the top of the seventh and added runs in the eighth and ninth innings for good measure.
GSW tossed another mark on the board in the bottom of the seventh when Will Redding offered up a sacrifice fly to bring in Martin. The Hurricanes brought their tally to eight runs in the bottom of the ninth when Redding brought in Long and Jones with a double.
GSW’s Jordan McIlwain is charged with the loss after tossing six and one-third innings, striking out one batter along the way. Jarrod Crum stepped in for relief and dispatched three Brave batters.
Alderman, Martin, and Moore each collected two hits in the match, with Alderman and Martin contributing RBIS. Redding added three RBIs on his sole connection of the tilt.
Martin and Long both hit doubles.