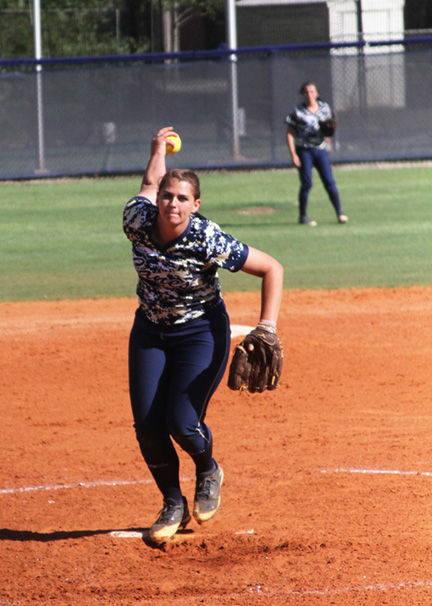 MICHAEL MURRAY I ATR: GSW’s Kaley Sikes turns up the heat during the third inning of the Lady ‘Canes’ April 6 tilt against FVSU. Sikes struck out three batters in the match.

AMERICUS – Georgia Southwestern State University’s (GSW) Allee Denney recorded a home run, a triple, and a double in game one and a single in game two to complete the cycle and help the Georgia Southwestern softball team sweep Fort Valley State University (FVSU) on April 6 at Lady ‘Canes Field in Americus.
With this pair of wins over their non-conference FVSU foes, GSW is now 19-27 overall.
Denney went three-for-three at the plate for the Lady Hurricanes in game one of the doubleheader, recording her home run in the first inning, a triple in the second and a double in the fourth.
Brittany Davis started out GSW with a double in the initial frame to left center and proceeded to score off a single from Mikela Barlow. Hayley Tierce doubled to right center to score Barlow and Denney’s home run brought her in.
GSW scored seven runs in the second inning to lead 11-0 after two innings. Tierce recorded her 11th home run of the season in the second inning, scoring Barlow and Denney’s triple allowed Joshlyn Martin to complete her round trip. Denney then scored off a single from Shannon Gibson. B. Davis added an RBI single to plate Sabrina Sieber before Rebekah Davis scored off a walk. Graysen Sanders completed the rally, crossing the plate after Tierce was intentionally walked.
Denney scored in the third off a single from R. Davis. FVSU was able to push a run across the plate with an RBI single in the fourth.
Ella Hawkins scored off a fielder’s choice in the fourth and Sieber singled to left field to bring in Martin and push the Lady ‘Canes’ lead to 14-1.
GSW held off Fort Valley State at the top of the fifth to win the game.
Sieber went three-for-three at the plate and Tierce was two-for-two with four RBIs.
Gibson pitched 2.2 innings, facing 10 batters and striking out three. Gibson only allowed two hits.
Tierce pitched 2.1 innings, facing 12 batters and striking out five. Tierce walked four walked four batters as she scattered one hit and one run.
Game two of the afternoon series was just as exciting for the Lady Hurricanes’ fans.
GSW took another large lead early, scoring seven runs in the first inning.
Tierce, Sanders, R. Davis, and Hawkins all hit RBI singles to kick off the Lady ‘Canes’ push for the early lead.
Martin added an RBI double. Tierce scored off a walk and Emily Smith then came in on a wild pitch.
With bases loaded and one out in the second, Smith hit a grand slam, recording her first home run of her collegiate career and put GSW up by 11 runs.
Sanders scored when Tierce was intentionally walked and Hawkins scored off a single from Martin to give GSW a 13-run advantage after two innings.
FVSU broke their silence off a double down the left field line in the third stanza and the Lady ‘Canes scored four more runs in the fourth. Gibson kicked off the rally with a two-run single. Sanders followed with a one-run single and Gibson scored off a fielder’s choice.
GSW held off Fort Valley State at the top of the fifth to shut it down again in five innings and complete the sweep.
Tierce, Martin, and Gibson all were two-for-three at the plate and recorded two RBIs apiece. Sanders went two for two with two RBIs and Smith added five RBIs.
Brittany Childs pitched 2.2 innings, facing nine batters. Childs struck out four batters and walked one.
Kaley Sikes pitched 2.1 innings, facing 11 batters and striking out three. Sikes walked two opponents and allowed one hit and one run.
The Lady ‘Canes are away on April 8 for a conference doubleheader against Francis Marion University starting at 1:00 p.m.