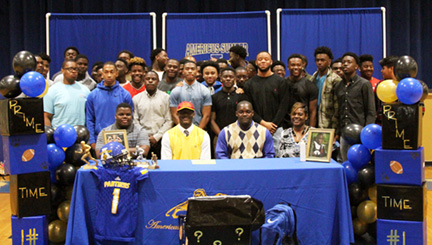 MICHAEL MURAY I ATR: Johnson, seated center, pauses for a photo with his teammates after signing his letter of intent to play football for Tuskegee University in the 2017 season. Seated with Johnson are, from left, his brother Shykieth, his father David, and his mother, Fanesia. The photo at right is placed in memorial of Johnson’s late brother, Jayden.

AMERICUS – Dave’on Johnson, a talented senior at Americus-Sumter High School (ASHS), shared some exciting news with his teammates and classmates on April 10 when he signed an agreement to attend Tuskegee University following his graduation and join the university’s team, the Golden Tigers, on the gridiron for the 2017 season.
In a ceremony in the Panther Den on ASHS campus, Johnson agreed to join the Golden Tigers as a preferred walk-on next season.
Johnson, who has been honing his athletic skills as a wide receiver for the ASHS Panthers over the past four years, made his announcement with a flourish, removing crimson and gold balloons from a box adorned with question marks at the ceremony as he revealed his decision.
Johnson was introduced by ASHS principal, Kimothy Hadley, who discussed his determination on and off of the football field and stated, “We are excited for him… Wherever Dave’on goes, it’s going to be a positive thing for that institution. It’s a positive thing for our community and we’re going to support him and root for him every Saturday that he suits up.”.
ASHS head football coach, Erik Soliday, then addressed the audience to congratulate Johnson. “It’s always exciting for all of us when one of ours gets the opportunity to do something like this,” Soliday stated. “He certainly deserves it. I think we all remember a lot of plays, especially that last play in the game against Dooly County. We’ll never forget that play,” Soliday said, referring to a touchdown catch pulled in by Johnson to give the Panthers an overtime victory over the Dooly County Bobcats early in the 2016 season.
Soliday went on to express his gratitude to Johnson for his efforts both on the field and in the classroom.
Valecia Sales then addressed the crowd before Johnson opened the mystery box and pulled out the balloons and a Tuskegee University cap to a round of applause from the audience.
Addressing the crowd of his teammates, family members, and supporters, Johnson also revealed that the date April 10 holds special significance for his family, as that was his late brother’s birthday. A candle was lit on the table at the ceremony in memorial of his brother, Jayden, who passed away in 2014. “He’s the reason why I do what I do…” Johnson said. “To this day, he is still with me and the rest of my family.”
He went on to thank his coaches and teammates for their support.
He then signed the agreement, confirming his intentions to play for the Golden Tigers in the fall before his teammates joined him for a series of photos.
Prior to the ceremony, Johnson spoke with the Times-Recorder to discuss his decision. Asked how he came to the decision to attend Tuskegee, Johnson said, “For one, they’re family-oriented so, when I’m there, I feel like I never left home. There’s a lady there that helped me a lot when I went over to tour the school and I just felt like I was at home.”
On his time with the Panthers, Johnson told the Times-Recorder, “I played my ninth through my 12th grade year. I really didn’t start excelling until my 10th-grade year. That was when Coach [Dexter] Dawson was here. After that, my career just soared from there.”
In his senior year, Johnson was named first team all-region. Last season, he was also invited to participate in the “War of the Border” Georgia v. Florida All-Star game. He led GHSA Region 1-AAAA in receiving yards and catches during his final season with the Panthers.
Johnson stated that he is also on the ASHS track team. “I just run track to stay fit,” he said.
He added that he is interested in pursuing a sociology degree during his time at Tuskegee.
Soliday spoke with the Times-Recorder before the ceremony as well, saying, “It’s a great thing to see a kid get the chance to go onto the next level, play football, and get a chance to further their education, too. He’s had a great career here, a great senior year and he made a lot of plays for us. We’re just really excited for him to get this opportunity. He’s worked pretty hard in the classroom so I’m glad that’s paying off for him.”
Hadley discussed Johnson’s influence in a brief interview, saying, “…He’s quiet. He’s not a young man that stands out as far as his voice, but his actions really stand out. His actions in the classroom, meaning that he’s focused. He takes his work seriously and that also transfers over to the football field. Obviously, with us witnessing what happened today, we see how seriously he took his academics and his athletics. He’s a well-rounded young man. He carries himself well. He’s a great leader for our younger students to follow. His teammates are here and they’re excited for him. They’re happy for him and we’re happy for him as well.”