Wreck near Plains results in fatality 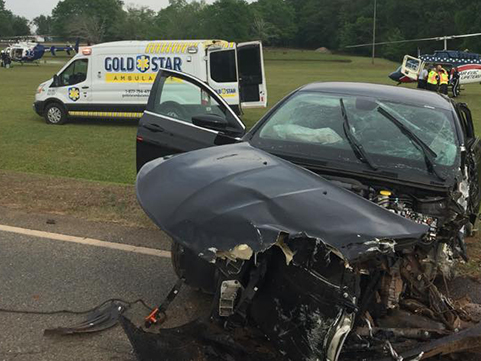 The front of the Chrysler 200 after the crash.

PLAINS — A Jonesboro man died and his passenger was injured in a traffic crash shortly after 5 p.m. Wednesday on U.S. Highway 280, just east of Plains near the Plains Welcome Center. The driver of a Chrysler 200, Terance Gerell White, 33, of Jonesboro, died after being airlifted to Midtown Medical Center in Columbus. His passenger, Richard Ray Coley, 52, of Hendersonville, N.C., was taken by ambulance to Phoebe Sumter Medical Center for treatment for his injuries.
According to the Georgia State Patrol Post 10, Americus, which investigated the wreck, the Chrysler was traveling east on 280 while the tractor trailer was traveling west. The Chrysler crossed the centerline and struck the truck’s left side and left tandem axel with its front left side. After impact, the Chrysler began to rotate counterclockwise and struck the tandem axel of the trailer, finally coming to an uncontrolled rest on the south shoulder of 280, partially in the eastbound lane, facing north. The tractor-trailer came to a controlled final rest in the westbound lane of 280, facing west.
The report said the area of impact, determined by evidence at the scene, occurred in the westbound lane of 280. The truck driver told the investigating trooper that when he saw the Chrysler cross the centerline, he swerved in an attempt to avoid collision. The truck driver, of Columbus, was not injured. 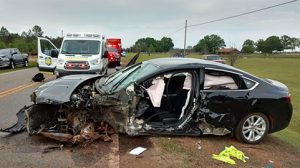 The side view of the Chrysler 200 after the crash. 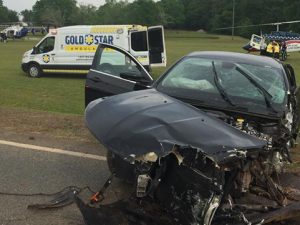 The front view of the car.