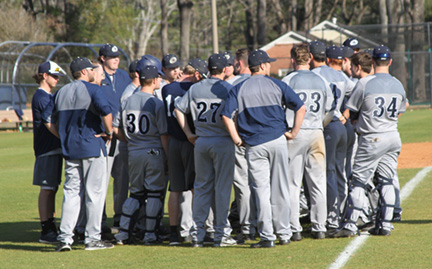 AMERICUS – Fresh off of an exciting 2-1 split in last weekend’s series against the University of Montevallo, the Georgia Southwestern State University (GSW) Hurricanes baseball team cruised to a 10-4 victory over the Tuskegee University Golden Tigers on April 11 in Americus.
GSW’s Zach Barron nailed his fourth homerun in four consecutive games to help propel the Hurricanes to victory in the home contest, bringing his season-long homerun tally to eight total. The victory over Tuskegee marked another exciting milestone for GSW’s Alex Kranick, who logged two hits in the tilt, marking the 27th consecutive game in which he’s made a connection with the baseball.
GSW has won three of its last four games and, with Tuesday’s win, improved to 16-21 overall while Tuskegee dropped to 19-19.
Tuskegee scored the first run of the game in the second inning, but it proved to be a short-lived lead for the Golden Tigers.
GSW jumped ahead in the third behind a two-out RBI double down the right field line by Will Redding and a follow-up RBI single from Jonathan Martin.
The Hurricanes stretched their lead to 5-1 in the fifth by converting two singles, a walk, and a Tuskegee error into three runs.
Tuskegee pushed a pair of runs across the plate in the sixth frame to narrow the gap to 5-3, but Martin struck again with an RBI single in the seventh and Barron kicked off the scoring in the eighth with a solo home run. Redding followed with his second double of the evening, a two-run poke that scored Bradley Hough and Jacob Harrell.
Kranick pushed his GSW record-setting hit streak to 27 games with a single in the fifth. Martin led the Hurricanes with a three-for-four performance at the plate. Kranick, Redding, Barron and Josh Logan collected two hits apiece. Redding led the Hurricanes with three RBIs.
Ricky Green and Matthew Reed collected two hits apiece for Tuskegee.
GSW spread the work over six pitchers. Starter Kyle Spinks handled the first inning. Andrew Patrick (1-1) picked up the win with two innings on the hill. He allowed two hits and a run. Drew Powers followed with two scoreless innings. Coty Graham surrendered a pair of runs over his inning. Tuskegee scored a run off A.J. Hayes over his two innings before Mitch Holloway tossed a scoreless ninth frame.
Tuskegee used four pitchers in the game. Starter, Christian Marshall, (2-3) saw the most action of any pitcher on either side by working five innings. Marshall allowed six hits and five runs, three of which were earned. He walked four batters. Darien Brown gave up one run over his two innings of work. Keldric Burton pitched one-third of an inning and was charged with four runs. Nytorious Cooler tallied the final two outs.
GSW resumed Peach Belt Conference play on April 14 against Armstrong State University. The results of this match-up were not available at press time.
The Hurricanes will be back in action on April 15, celebrating Senior Day as the team concludes their three-game series against Armstrong. The ‘Canes will hit the road again on April 18, traveling to Cochran to battle Middle Georgia State.

Trio of ASHS hoops stars sign on with Chattahoochee…