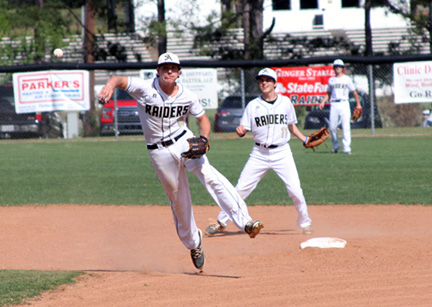 MICHAEL MURRAY I ATR: Southland’s Hunter McCain (10) fires the ball off to first base to dispatch a Tiftarea runner after scooping up a grounder during inning two of the Raiders’ April 11 match-up against the Panthers.

AMERICUS – Clear skies filled the atmosphere on April 11 at Southland Academy as the Raiders hosted Tiftarea Academy.
On the heels of a 1-0 defeat of the Crisp Academy Wildcats in which three Southland pitchers combined to pull off a no-hitter, the Raiders were looking for a repeat performance on their home field against the Panthers.
Southland’s Raiders flexed their defensive muscles early in the first inning of the Tiftarea opener when junior third baseman, Harrison Bell, made an expert dive to stop a line drive from going into the right field gap.
Senior pitcher, Michael Hudgins, got the start for the home team and delivered early and often as he retired the side, not giving up a hit in the first two innings. It was three up and three down for Hudgins and the Raider defense.
Meanwhile, at the plate, Southland ran into quite a matchup battling pitcher Dawson Patterson of Tiftarea Academy. Patterson would finish the night with eight strikeouts.
With the game still scoreless at the top of third, Tiftarea looked for a spark, but Southland center fielder Clay Owens put a stop to Panthers’ attempts with a sliding catch in center field. Sophomore catcher, George Wall, went on to throw out the baserunner trying to steal second that brought the inning to an end and shifted the momentum momentarily.
At the bottom of the third inning, the hosts stilled struggled to get their bats going, ending the frame with back-to-back strikeouts. The score board finally saw its first run in the top of the fourth when Patterson gave Tiftarea a much-needed boost from the plate as well as the mound, blasting an RBI double and giving the Panthers a 1-0 lead.
However, the weight of carrying the team on his back began to leave Patterson fatigued and Southland capitalized on his pitching mistakes in the bottom of the fourth.
Bell got his bat going when he sent a grounder past the Panthers’ short stop into right field for a single. After the next batter drew a walk, it put a runner into scoring position for Southland, which was a rare sight for either team Tuesday evening.
Wall’s defensive play led to an offensive highlight as he brought in a run with an RBI, making it tied ballgame at 1-1 after four frames.
In the top of the fifth, the Raiders found themselves in a jam as the bases were loaded with one out before a pitching change was made. Hudgins pitched four innings, finishing with three strikeouts and only giving up one run. Bell was brought to the mound and he delivered, getting Southland out of the jam by only giving up a sacrifice fly, making it a 2-1 lead for Tiftarea.
The score remained the same until the last inning when a few mental mistakes put Southland in a bind heading into the bottom of the last inning, trailing 4-1.
Never count the Raiders out, because Southland would not go away quietly. After a walk put a runner on first base, Owens delivered a line drive shot that put runners on first and second. Freshman, Hunter McCain, kept the Raiders alive, ripping off an infield single by hustling down the line to beat out the play at first that brought in a run for his only RBI of the game. McCain’s speedy play cut the Raiders’ deficit in half at 4-2 with a runner on first. Errors made by Tiftarea’s pitcher allowed the Raiders to keep the rally going as Southland would go on to load the bases
A sacrifice fly cut the lead to 4-3, with runners in scoring position to tie the game for the home team. However, the comeback was cut short as the last batter went down swinging, ending the game and crushing the comeback hopes for the Raiders.
Leaving the field, the Raiders saw no need to hang their heads as the defense played an outstanding game for Southland Tuesday evening.
The Raiders traveled to Chula on April 13 for a rematch against the Panthers. Tiftarea rode the momentum of their previous win over Southland to a 9-6 victory.
With four contests left on their regular-season schedule, the Raiders’ overall record currently sits at 5-8-1.
The Raiders return to action on April 18, traveling to Thomasville to test their skills against the Brookwood Warriors.