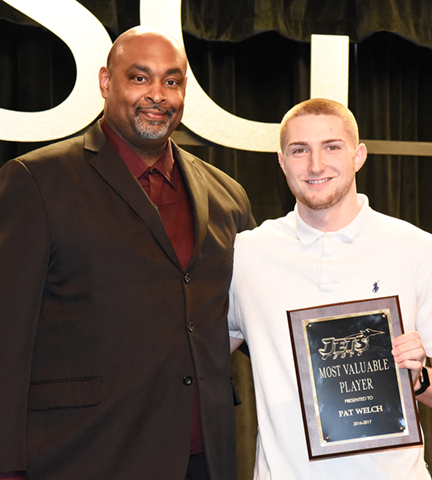 AMERICUS – The South Georgia Technical College (SGTC) Jets Booster Club recently held a special Recognition and Awards Banquet recently in the John M. Pope Industrial Technology Center on the South Georgia Technical College campus to honor the 2016-17 Jets and Lady Jets players and coaches. Cory Black of CBHoops was the special guest speaker.
SGTC President, Dr. John Watford, thanked the over 100 individuals who attended the banquet for their support of the college, its athletic programs, athletes and student body.  “We have so much to be proud of,” said President Watford. This is a fine group of men and women who have a lot of talent but who also displayed strength, spirit, and integrity on and off the court this season. It takes more than talent to have a successful season, it takes synergy. That is when the creation of the whole is greater than the simple sum of its individual parts. That is what we witnessed this season with both the Lady Jets and the Jets,” concluded Watford as he praised the players, coaches and staff members.
Jets Booster Club President, Martha Arrington, echoed Watford’s comments. “It was a great year and on behalf of the Booster Club, I would like to thank each of you in the room tonight for your support of the players and the coaches. Thank you for joining the booster club and for stepping up anytime, we asked. This was a great season and it was great because of the support that we received from the college, administrators, faculty, staff, and the community,” said Arrington.
Three individuals were singled out at the banquet for their outstanding contributions to the teams and program this season. SGTC Athletic Director and Lady Jets head coach, James Frey, opened the awards ceremony by recognizing athletic trainer Brian Davis for his services and support.
“Brian Davis may have been the most valuable member of our program this season. We counted on him so much, not only for his knowledge but also for his calming influence through what was a very difficult season, injury wise. He made a difference. He was much more than a trainer and we wanted to recognize him for his contributions on and off the court,” said Frey. “There are a lot of late night hours and behind the scenes work that most people never see and he has been there working to get these young men and women ready to go out on the court and play.”
Frey then turned the program over to Jets head coach, Travis Garrett, who shared that he was very proud of the Jets. “Despite a 13-20 overall record and a 5-11 conference record, this team never gave up. These guys never stopped fighting, they gave an intense effort even when everything did not go just right. That will and determination showed as we came back and finished in second place in the NJCAA Region XVII tournament.”
Garrett also took the opportunity to single out sophomore, Pat Welch, as the Jets MVP for 2016-17.  “MVP this year can also stand for Most Valuable Person,” said Coach Garrett. “Pat did an outstanding job for us on and off the court. His last second shot against Gordon allowed us to move up and earn a spot in the semi-finals and finals of the NJCAA Region XVII tournament. He has been a tremendous asset and we will miss him next season.”
Frey also revealed the MVP for the Lady Jets. “This has been the most difficult season injury wise, I have ever been a part of,” he said. “But these young ladies just stepped up and did what they needed to do to help us reach our goal of a championship and a trip to the national tournament. We lost three sophomores and every time one player went down another one stepped up. We ended up starting four freshmen during the tournament and doing well and that says a lot about this team.”
As he spotlighted each of the players, Frey said that his MVP award went to sophomore guard Shaineequah Fluellyn.  “Shay was not starting at the first of the season, but she did everything we needed her to do and she is one big reason that we won the GCAA regular season, the NJCAA Region XVII tournament, the District J championship and finished in the sweet sixteen at the NJCAA national tournament in Lubbock, TX. I thank her and wish her the best as she continues her career on and off the court.”
Frey also revealed that the Lady Jets have signed all seven of the freshmen players from the 2016-17 season to return for the 2017-18 season. “We are already looking forward to another great season based on this nucleus returning,” he said.