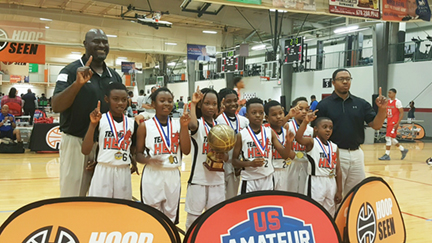 Team Heat, a local youth basketball organization, recently won the second round of the Georgia World Cup at Suwanee Sports Academy, in Lawrenceville.
With the win, Team Heat earned the opportunity to advance to the third round of the Georgia World Cup, scheduled to begin on April 21 at Suwanee Sports Academy.
The team, composed of players age nine and under, is coached by Schley County High School varsity basketball coach, Earnest Scott with the assistance of Marcus Harvey.
In a press release, Scott told the Times-Recorder, “Team Heat used speed and grit to take home the nine-and under championship of the Georgia Cup II… The Americus-based team did a great job of getting to the rim and scoring in transition during the title game. [The team got] 12 points from Amari Hubbard. Omari Woodard scored seven. Aaron Kearse scored six and Jestynie Scott scored four points in the championship game.”
Other players on the team’s roster are Marcus Harvey, Jaseph Jordan, Jeremyah Rogers, Bryce Hamilton, Tyler Clark, and Javoris Scott.
The press release also stated that the team would like to give special thanks to team sponsors, After Hours Care and State Farm – William Bailey.