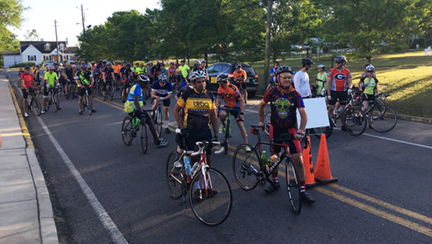 SUBMITTED BY JULIO PORTILLO: Dozens of cyclists prepare for their journey as part of the Prison to Peanuts Bicycle Adventure on April 22 in Americus.

SUMTER COUNTY – As part of their annual National Park Week celebration, on April 22, both the Jimmy Carter National Historic Site (JCNHS) and the Andersonville National Historic Site teamed up with the River Valley Regional Commission (RVRC) and Sumter Cycling to give bicycling advocates from all over the southeast United States a special treat.
The Prison to Peanuts Bicycling Adventure saw about 115 riders come to Sumter County to get some exercise and experience many of the wonderful things that Sumter County has to offer.
Participants had the option of choosing rides that spanned 12, 34, 66, or 105 miles with each length ending at Rees Park, in Americus where riders were invited to take part in the annual Arts in Rees Park facilities.
Riders that undertook the longer lengths of the course were able to visit both the ANHS and the JCNHS, as well as enjoy much of the lovely, serene scenery of Sumter County.
There were 12 cyclists that tackled the Century (100-mile) ride.
Julio Portillo, Community and Bicycle Pedestrian Planner of the RVRC, spoke with the Times-Recorder as the event was winding down.
“We had about 115 riders show up today…,” Portillo said. “We had a gentleman that came all the way from Charleston, South Carolina to do the ride, which is pretty cool… We had an eight-year-old who came and did it, too… That’s two new things… Someone from very far away coming to do the ride and our youngest rider.”
“Everything’s gone smoothly,” Portillo added. “All of the volunteers have stepped up and helped out… It’s nice to combine the bicycling with the Arts in Rees Park and make it a big community.”
Portillo stated that, in addition to members of Sumter Cycling volunteering to help ensure that the event was successful, several volunteers had also come from Bicycle Columbus and from Columbus State University.
The event also sparked interest from a pair of Atlanta-based cycling clubs, the Ladies on Spokes and South Side Cycling. There were 11 cyclists representing these two groups at the event.
Sarah Swab, a member of the Ladies on Spokes, spoke with the Times-Recorder about her experience with the ride.
“We love getting out and going to new places,” Swab began. “I liked the ride. It was good. The funny thing is that we usually ride in a very hilly area and we weren’t expecting any hills. There were a number of good hills on the route.”
“It was a good route,” her friend confirmed. “We had very little traffic. Nobody bothered us.”
Asked if they would consider returning to Sumter County to participate in the ride again in the future, each rider enthusiastically agreed, “Sure!”
“I think next time I’d even try staying at the Windsor Hotel,” Swab concluded. “I didn’t realize what a nice little town Americus is.”
Rachelle Bitterman, of Albany, participated in the ride alongside two friends, Lynda Carriveau and Lana Haggerty. On her experience at the event, Bitterman told the Times-Recorder, “The rest stops were very good. The people were very nice and attentive. It was cool being able to go into the Jimmy Carter High School and see the historic high school. That’s where the rest stop was, so that was pretty cool to see his high school… It was a great ride. There was a little bit of a headwind, but it was fun. Lots of hills, compared to Albany.”
Mark Hayes, from Americus, enjoyed the ride with his cousin, Neal Trice, of Thomaston.
“It was a great ride, a great morning,” Hayes told the Times-Recorder before Trice added, “It’s a great course with great rest stops and friendly people. I’ll definitely come back, absolutely. I love it. Well-organized. Great event.”
After returning from volunteering as a “sweeper”, at the ride, Ryan Iafigliola, the head of Sumter Cycling, told the Times-Recorder, “It was a beautiful ride. It may be the best it’s ever been. The weather was perfect this morning. We had a great turnout. People came from all over… It’s great that we get locals to participate, but we also draw in a lot of people from outside the community and they come stay here. We like to help show off our community and show off Arts in Rees Park and help support tourism in the area.”