Local, area leaders flock to State of the Community breakfast 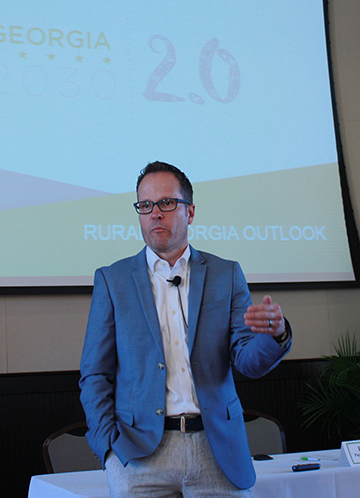 Chris Clark, president and CEO of the Georgia Chamber of Commerce.

AMERICUS — A large crowd of local and area business and government leaders gathered on the campus of Georgia Southwestern State University early Thursday for a breakfast and program on the rural Georgia outlook for the next couple of decades. The event was hosted by GSW, and presented by the One Sumter Economic Development Foundation. The event was designed to serve as a public forum for business and industry leaders to learn about demographic trends, economic development opportunities and political influences that affect the state and Southwest Georgia.
The featured speaker was Chris Clark, president and CEO of the Georgia Chamber of Commerce.
Clark said that Atlanta will add approximately 1.5 million people (a nearly 70 percent increase) in the next two decades, while 74 counties in the state will either lose population or show no gain.
“Rural Georgia is having a lot of pain right now,” Clark said. He described a rural community as one with less than 55,000 jobs.
On a national score based on six factors, he said, Georgia is ranked 4th highest for percentage of population in distressed areas with 83 counties of 159 (53 percent) ranked as distressed. The national average is 20 percent.
Clark explained the distress factors.
• Talent : 57 counties had 45 percent of higher adult population, ages 16-64, not working. In the next 15 years, Clark said, many communities will face workforce challenges as the percentage of retirees increases and the millennial group decreases. By 2030, some 56 Georgia counties will have 25 percent or more of population of people age 65 and older.
• Poverty: 59 of Georgia’s 159 counties have a greater than 25 percent poverty rate. The highest rates are in Calhoun and Clay counties, both located in Southwest Georgia. In those two counties, 42 percent of the population are below the official poverty threshold. Clark said the story is worse when the focus is on Georgia’s children — 112 of the 159 counties have 25 percent or higher children living in poverty. “By one national measure,” he said, “Georgia ranks 42nd for those living in poverty — families and children.”
• Uninsured population: In Georgia, 21 counties have greater than 25 percent of population uninsured. “If no changes are made,” he said, “this number will skyrocket to 131 counties (by 2026).”
• Job change: During the years of 2010-2015, 73 of Georgia’s counties lost jobs. It is projected, Clark said, that between 2016 and 2026, 87 counties are projected to lose jobs.
• Business establishment change: Sumter County lost 4 percent of its businesses between 2000 and 2010, and nine percent between 2010 and 2014. As of 2014, Sumter County had 615 business establishments.
Clark further focused on Sumter County. He said the population is expected to drop by 17 percent in the next couple of decades, from 35,648 to 30,922. Sumter County has a distress score on 89.7 percent and ranks 102nd in the state. The population of people ages 65 and older is Sumter County is 23 percent.
Sumter’s poverty rate is 33 percent, and 55 percent for children. Sumter County lost 4 percent of its jobs, a decrease from 12,400 to 11,860, and is projected to lose another 1,700 jobs, a decrease of 10 percent.
As for the state’s economy, Clark said by 2026, Atlanta’s economy will be “much more driven by business support functions versus the rural areas which will continue to rely on manufacturing and agriculture.”
Clark stressed that there is a real need for partnerships in economic development. He said that it is incumbent on leadership to look to establish/create strategic solutions in response to the “distressed” conditions and predictions. He said the traditional model for economic development needs to be complimented by a strong quality of life/community development strategy, that focuses on issues such as crime, poverty, housing, race relations, etc. He also mentioned that One Sumter is a good start in the right direction, but that the leadership of the business community needs to get behind the strategy and help be the drivers of the solution. 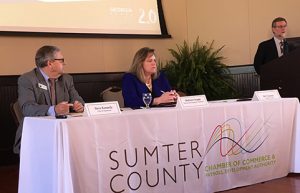 Other guests included Sumter County Administrator Bill Twomey, Americus City Manager Steve Kennedy, and Sumter County Payroll Development Executive Director Barbara Grogan.
Kennedy, in his comments, said that he is seeing more pride in the appearance of Americus, with more people stepping up to keep the sidewalks, streets and parks clean.
While there is never enough funding available, he said, the city government is efficiently and strategically using what there is.
Of the challenges and issues facing the city, Kennedy said there are still voids in the downtown area, about 6 percent vacancy. “We are not easy to do business with,” he said, adding that he is in the process of evaluating the processes, rules and ordinances that apply to new businesses in the downtown trade zone.
Kennedy outlined some positive factors supporting growth in the city of Americus.
• A surplus of downtown storefronts.
• A surplus of available industrial sites.
• Excess utility capacity with water, sewer and natural gas.
• New staff member perspectives with new ideas from the new tourism director, Main Street director, public works director, police chief and soon to be fire chief.
• Partnering initiatives with Georgia Southwestern State University (GSW) and South Georgia Technical College (SGTC).
• Downtown Development leadership, One Sumter initiative and the Archway Partnership, and an increase in motel-hotel tax collections, which are up $12,759 over first quarter 2016.
Kennedy also shared the priorities for the city.
• Improved coordination with tourism venues.
• Put Americus on the regional, state and national radar.
• Coordination of program initiatives with GSW and SGTC.
• Continued discussions with various parties involving broadband.
• Moving toward full staffing of the Americus Police Department.
• Continuing to review and update city ordinances.
• Start programming the RSVP Plan and complete the city’s Comprehensive Plan.
The city manager also highlighted the city’s progress in key areas.
• Improvement in drainage infrastructure, roadway appearance and storm water inventory citywide.
• Road improvements on North Lee Street, Sharon Circle, Rose Avenue, Shirley Road and Extension, Glessner Street, North Jackson and GSW area; better coordination with GDOT and local agencies.
• The Downtown Development Authority’s continued efforts to acquire property, establishment of the Revolving Loan program in an effort to assists businesses downtown.
• Another year of no millage rate increase.
• Use of TSPLOST (transportation special purpose local option sales tax) revenues in issuing $850,000 in paving contacts to address six areas, all of which are in progress.
• Use of SPLOST revenues in getting 75 percent of city buildings/facilities repaired, ongoing paving and repairing roads and bridges, 60 percent complete on South Jackson Street train depot, and ongoing improvements for the city’s parks and green space.
In closing, Kennedy urged those present to “be involved, be informed, be part of the solutions and not the problems, be open to change, be an advocate for growth, and put feet on some of the ideas that are being discussed.”