Body found in car Sunday afternoon might be missing man 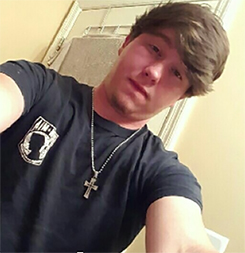 AMERICUS — The body of a young Americus man missing since April 25 was found late Sunday afternoon in rural Sumter County.

According to a press release from the Americus Police Department, Sumter County Sheriff’s deputies responded to a report of an abandoned vehicle at approximately 5 p.m. Sunday on Clements Road. Upon arrival deputies found

a 2004 Chrysler Crossfire registered to Brandon Dewitt Williams, the 20-year-old missing man. The vehicle was located approximately 600 yards off the roadway in a wooded area. They also found a body inside the vehicle, which they believe to be that of Williams, according to the release.

Sumter County Coroner Greg Hancock said the body, which he said cannot be positively identified yet, was to be sent to the State Crime Lab in Macon for autopsy Monday afternoon.

Assisting in processing the scene was the Georgia Bureau of Investigation Region 3 Americus Office.

Williams was last scene around 6:45 p.m. Tuesday, April 25 and at a residence in the 300 block of East Dodson Street. He was also reported to possibly be in possession of a rifle when last seen.