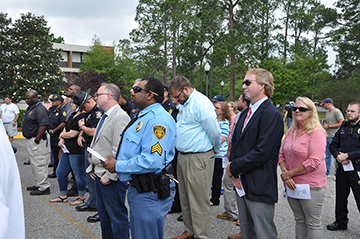 A large numbre of law enforcement, faculty and staff from GSW, and people from the community attended the building renaming and dedication ceremony.

AMERICUS —In February, the Board of Regents of the University System of Georgia approved a proposal from Georgia Southwestern State University (GSW) Interim President Charles Patterson to rename the University’s Public Safety building the “Nicholas Smarr and Jody Smith Memorial Building.” A dedication ceremony was held April 27 directly outside the building entrance. A large crowd attended despite the threatening clouds.
Smarr, an Americus police officer, and Smith, a GSW police officer, lost their lives in the line of duty in early December 2016. Smarr and Smith were high school classmates, roommates after high school, and graduated together from the Police Academy at Abraham Baldwin Agricultural College. They were also best friends.
President Patterson welcomed the families and friends of the slain officers.  “You will forever be part of a very large family that supports you,” he said. To all the families and officers of campus and community, Patterson said, “We remain always in your service and in your debt for the sacrifices that your sons have made.” He also recognized all the first responders in the audience as well as faculty, students, staff and community members who were all impacted by the events of Dec. 7. “We are a community that is steadfast in becoming stronger to support one another,  especially when those individuals are in need.”
Patterson said the campus Public Safety Building was previously home to the GSW Health Clinic and was named for Herschel A. Smith, M.D., GSW’s first campus physician and was instrumental in establishing the University’s nursing program. At the February 2017 Regents meeting, approval was also given to transfer the Smith name to the current home of the Health Clinic within the Rosalynn Carter Health and Human Sciences Complex. He recognized Herschel Smith and Rucker Smith, the doctor’s grandsons, who endorsed the renaming of the facility.
In his dedication, Patterson unveiled a portrait of the two officers which will be placed in the newly renamed building, along with separate resolutions from the Georgia House of Representatives in honor of Smarr and Smith. The resolutions were presented to the families by former state Rep. Mike Cheokas and his wife Gaynor. 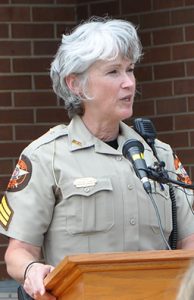 State Sen. Greg Kirk, R-Americus, then took the podium. He read a letter from Lt. Governor Casey Cagle who was unable to attend. “… Renaming this building will serve as a lasting memorial for two men dedicated to protecting you and your community. Your legacy will now be a visible reminder for every person who visits. You may ever forget the impact these fine men have left on Georgia Southwestern, on Americus and the state of Georgia … ” Kirk closed with a prayer.
State Rep. Bill McGowan, D-Americus, in his remarks, expressed appreciation for the University System of Georgia and Charles Patterson for the decision to rename the building. 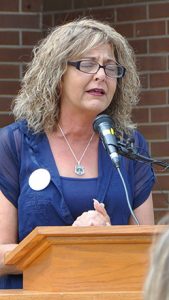 Vernon Keenan, director of the Georgia Bureau of Investigation, who was also here on Dec. 7 and 8, 2016, also took the podium. He said the men and women of the GBI were honored to participate in the ceremony. He related a story about his speaking to a group of police officers from Israel the same week the two officers were killed. He said some of the Israeli officers cried, not because they knew Smarr and Smith, but because of the fellowship between those who serve on the “thin blue line.”
Keenan said that term, the thin blue line, was termed in the United Kingdom and spread throughout the free world. “It relates to blue being the universal color of police, regardless of the color of the uniform … The thin blue line is what separates order from chaos … good from wicked … protects citizens from persons who would victimize them …separates the rule of law from anarchy. 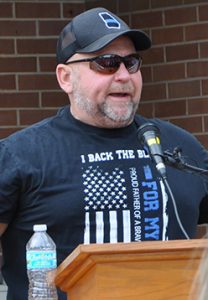 Johnny Smith, Jody Smith’s father, wore a T-shirt with the imprint: I back the Blue because of my son.

Nick and Jody served on that thin blue line and they knew … that when you serve … you can go into harm’s way … They died in the line of duty … ”
Bruce Holmes, chief of police, University System of Georgia, shared what it means to be a police officer. He said they are required “to swear an oath, affirming that they will uphold the law … to protect and serve … Officers work when others are asleep. They work weekends and holidays, spending precious time away from their loved ones … They must go when they are called. They have no choice of when or why or for who … When others flee to avoid danger themselves, police officers race to protect others … unselfishly place themselves in harm’s way every day. It doesn’t stop at the end of a shift. Being a police officer is not a job or easy way of life … Nick and Jody swore this oath and abided by this code of ethics. They promised to protect and serve. … ”
Americus Police Chief Mark Scott, in dress blues, thanked Patterson and GSW for the renaming of the building. “I think it is a fitting and proper tribute to two heroes … Back in December we all made a commitment to those families that we would not forget,” referring to a sticker on the patrol cars honoring the fallen officers. “Our challenge this morning is not only to not forget the sacrifices of these two officers and the heroes they were … and the legacy they’ve left … Our challenge today is to know that the legacy they leave is love and not hate, and one of commitment to service … Nick and Jody made a difference. As long as we remember who they were and what they stood for and as long as we honor their legacy of the lives they chose to live, they will not be forgotten … Nick and Jody’s legacy is not a building … their legacy is sitting right over here, the lives they touched and the families they loved. Their legacy’s back here, for anybody wearing that uniform who worked with them and stood side by side with them. Their legacy will live as long as we live and honor who they were and continue to fight the fight.”
Sumter County Sheriff Pete Smith urged, “Do not forget these young men. They made the ultimate sacrifice … these two young men deserve all the tributes we can favor them with …”
Mike Tracy, chief of police, the GSW Department of Public Safety, came to the podium last. He said that we are tasked to honor Smarr and Smith with our actions and deeds. “We’re tasked to care for their loved ones as if they are our own … By naming this building … we ensure that their sacrifice will not be swept away by time or simply forgotten. It reminds us  of the risk we take every day when we put this badge on. It reminds us of the inherent dignity of our profession. Whatever lesson we learn from this day and by the tragic loss of Nick and Jody will be passed on to others. It reminds the community of the daily potential for a disaster … of what can be accomplished when we all come together … The very nature of our work has the elements of war against chaos. We should always remember that when we put our uniforms on, we should always honor the people who have come before us.” 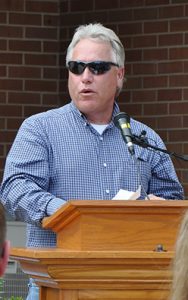 Tracy offered his and his department’s “sincerest appreciation” for honoring Smarr and Smith with the renaming of the building.
Patterson invited any members of the families of Smarr and Smith to speak.
Danny Lee Smarr, father of Nick Smarr, speaking for the Smarr family, thanked the Board of Regents, GSW and Patterson for renaming the building. He also thanked law enforcement for what they do every day. He said, with great emotion, that he believes he and his family will see Nick again some day. Janice Smarr, Nick’s mother, also spoke briefly, expressing her appreciation for all who will never forget her son and Jody Smith. Johnny Smith, Jody Smith’s father, also spoke, bringing a note of humor to the day. He was dressed casually and said he knew his son would not have approved but he wore a T-shirt that had “my son” written on it. Smith is a former Telfair County sheriff and Smarr and his son worked for him at one time. He recalled experiences with the two young men and how dedicated they were to their profession. He, too, expressed deep appreciation for all that has been done to honor the two fallen officers.
Sharron Johnson, Jody Smith’s mother, also spoke briefly. She said she is proud to be “Jody Smith’s mama.” She said her only son was her hero from the moment he was born.
“I never could have dreamed that all this has been done (referring to the recognition and honor for her son and Smarr), but it has been and I appreciate it. On Dec. 7, 2017, I thought it was the end of my life but I put God in my life … and it’s you guys that keep us going, keep us uplifted. I couldn’t do it without you and I appreciate it so much. I love my guys and girls in blue … One told me the other day, ‘we can’t replace Jody but you’ve got a whole lot of sons.’”