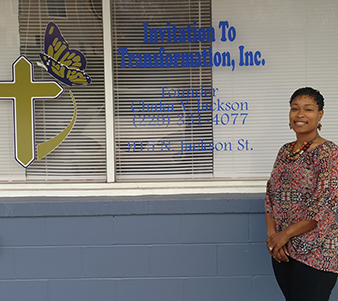 Chaka Jackson has started Invitation to Transform, a program for girls, in Americus,

AMERICUS — Invitation to Transform is a non-profit organization based in Americus. It was founded in 2015, and its mission is to help women find their worth, identity, and purpose in life. The founder of the organization, Chaka Jackson, originally had the idea in 2009, when she realized that her past was keeping her from living her to life to its full potential. She found the strength to let go of her past and embrace the future, but she also realized that many women were still facing the same issues with their upbringing, environment, and with rejection. Mrs. Jackson realized that she wanted to help these women, or as she puts it, “to be the voice that lets them know that they do have an identity and they do have a purpose.”
Jackson is a native of Americus with three children of her own, and she credits her husband, Xavier Jackson, with providing her the support she needs to make her dream a reality. She’s a psychology major, with a heavy concentration in Christian counseling, at Liberty University where she maintains a 4.0 grade point average.
Invitation to Transform offers several different workshops and programs to help the women in the area. The first workshop is the Women Empowerment Workshop, and it includes step by step guidance on how to become empowered at home, work, as well as spirituality. They also have parenting and family life workshops which are designed to assist single mothers in guiding and nurturing their child in every stage of that child’s life. For girls ages 12-18 there is the “Girls of Change” program which is designed to promote five areas of change for teen girls: empowerment, education, ethics, self-worth, and purpose. Finally, Jackson is a licensed non-denominational minister so the organization also offers Christian counseling and holds bible study at 6:30 p.m. every Thursday.
There has been a strong turnout for the programs, but more importantly there has been an overwhelmingly positive reaction from the community. Many people have expressed interest in helping out in any way they can. Anyone interested in donating can do so at www.i2transfom.com, or if they want to directly help they can volunteer. Information to Transform is open 9 a.m.-noon Monday and Tuesday, 6-8 p.m. Thursday, and 10 a.m.-2 p.m. every other. You can also set an appointment for any other time.