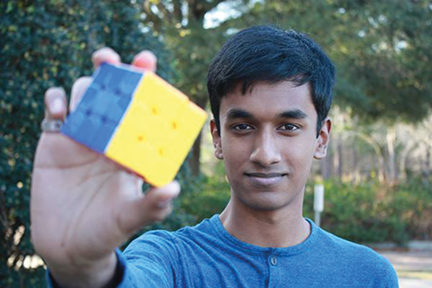 Joshua Cherian, shown with a 3x3 Rubik’s Cube puzzle, has organized the Windsor Cubing Classic 2017, scheduled to be held on June 24 at the Fine Arts Theater at GSW.

AMERICUS — A talented young Georgia Southwestern State University (GSW) student, Joshua Cherian, has recently joined forces with the Windsor Hotel to bring the Inaugural Windsor Cubing Classic 2017 to the campus of GSW on June 24.
The competition will see opponents from all over the Southeast test their skills at solving a variety of Rubik’s Cube puzzle challenges. At the event, puzzle enthusiasts of all ages will come together to compete in an array of different contests, including races in which they will attempt to solve the puzzles blindfolded, with their feet, and one-handed. Members of the community will be invited to participate in the event as well, as spectators will have the opportunity to take part in the creation of a 12×3 foot mosaic picture, made entirely out of Rubik’s Cubes, that will depict the Windsor’s logo.
Cherian recently spoke with the Times-Recorder about the upcoming event.
Cherian stated that he has long been interested in testing his chops with the Rubik’s Cube on a competitive level.
“I grew up with a Rubik’s Cube in my house just like just about anybody else. I soon enough found out that there’s a whole community of people who love speed-solving,” he said.
Last November, Cherian contacted the coordinators of a speed-solving competition in Marietta, asking how he could bring such an event to Americus. With their counsel, Cherian set the gears in motion to put together the first cubing challenge in Georgia to be held outside of the Metro-Atlanta area. In January of this year, the first ever Americus Open was held on GSW campus.
“I went up [to Marietta] and it was absolutely a great time,” he said. “Some of the fastest [solvers] in the region were up there and we said, ‘Let’s do one in Americus.’ GSW offered to let us host it there, so we started there. We started planning in early November and, by January, we were hosting the Americus Open. There were 30 or 40-something competitors of all ages and from all walks of life. They all came together and it was a blast.”
After the success of the first event, Cherian caught the attention of Sharad and Divya Patel, of the Windsor Hotel in Americus. Soon enough, the Windsor agreed to sponsor a second event.
Divya, director of Sales and Marketing for the Windsor Hotel, spoke with the Times-Recorder as well to discuss the hotel’s involvement with the project.
“Sharad Patel … is all about trying to better the community,” she said. “As a child, his father … instilled in him the idea that whatever you do in your lifetime, you should always give back to your community because, at the end of the day, you can’t take what you’ve created with you. You can only leave something behind. In his mind, giving back to the community is huge … He heard about Joshua [Cherian] … He’s super humble. He’s a great kid and he’s a genius … He’s just a fascinating kid.”
She went on to say that, following the event in January, several parents had expressed a hope that their children will choose to attend GSW.
“We were thinking, ‘This would be a really cool thing that would help out the university, it would help the community and, if people end up staying in town that come here for the event, that’s a bonus, too.’ We were intrigued by Joshua and we decided that we were going to sponsor the event to help him make this an annual thing,” she added.
“We, basically, are doing a call to arms to the public to come and watch these competitions because it’s a really neat thing to watch … “ she said. “We’re really excited about it … We’re hoping that it is successful. I think it would be cool to get kids involved and let them watch something interesting that they might not have seen before.”
Discussing the upcoming event, Cherian told the Times-Recorder that they are hoping to attract up to 100 competitors. He then went on to describe some of the events that readers may not be familiar with.
“You have a variety of different events that you can compete in with the 3×3 cube,” he said. “We will be doing this one-handed, 3×3 with feet, and the 3×3 blindfolded.”
When pressed on how a Rubik’s Cube puzzle could possibly be solved blindfolded, Cherian said, “I’ve heard a lot of people say that doing it blindfolded is easier because … in the traditional method, when you’re looking at it, is you go layer by layer. You’ll set everything up on the bottom layer and then you’ll do two other layers and finish the last layer. Blindfolded, you’re matching pairs of pieces … You’ll memorize a sequence and create a story based around that. It’s an entirely different world. I’ve solved it once blindfolded, but haven’t practiced it that much, but it’s a lot of fun.”
Asked about the competitions in which people attempt to solve the puzzles with their feet, Cherian joked, “We have a lot of Lysol wipes involved …”
“It’s pretty similar to solving the puzzle with your hands because, when you’re solving the cube, you’re looking for specific color patterns,” he added. “You’re going to say, ‘I know that [these pieces] need to swap places and you know that a specific sequence of moves will do that.”
Cherian then demonstrated the described technique [using his hands] with a 3×3 cube that he had brought to the interview.
“It’s basically the same thing, just doing it with your feet,” he concluded.
He went on to say that the prizes awarded to the winners of the competitions will likely come from online puzzle retailer, The Cubicle, which provided prizes for the earlier event in January.
“That’s most likely what the prizes will be this time around,” he said. “Winners will get trophies and gift certificates to The Cubicle.” 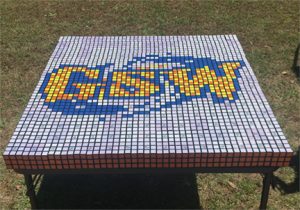 Cherian also told the Times-Recorder that he had recently orchestrated the creation of a Rubik’s Cube mosaic of 225 cubes at GSW for Student Appreciation Day as well as one for Furlow Charter School depicting the school’s mascot, the falcon.
“This is something that is not limited to the competitors,” he said. “We can show people how to solve just one side of the cube … If you can solve one side in a specific color pattern … you’re good to go. We’ll put it all together and we’ll make something cool out of that … The mosaic is probably going to be one of the most fun parts … It’s going to be a lot of fun.”
Asked if he has any tips for individuals interested in becoming adept at Rubik’s Cube solving, Cherian told the Times-Recorder that the Internet is a good place to start. “There are a million tutorials out there right now,” he said. “You can get a solid speed cube for four bucks and it will be absolutely great. There are forums on the Internet at speedsolving.com where people post all the time about [different techniques]. The resources available are just immense. It takes a lot of persistent practice.”
The competition will be held from 8 a.m. to 6 p.m. on June 24 at the GSW Fine Arts Theater.