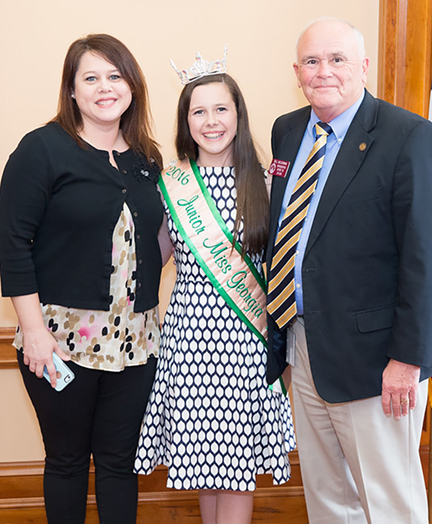 ATLANTA – Averi Smith, the reigning Junior Miss Georgia Peach and daughter of Jaime and Deke Smith of Americus, was honored at the Capitol recently. The 2016 Miss Georgia Peach queens were honored by the Georgia House of Representatives and Georgia Senate with a resolution sponsored by Reps. Robert Dickey and Bill McGowan and Sens. Greg Kirk, Larry Walker, and John Kennedy. Queens were also recognized by Governor Deal and the Secretary of State Brian Kemp. Averi is a seventh grader at Southland Academy. Since it was Law Appreciation Day at the Capitol, Averi and her sister queens, Tiny Miss Bella Grace Sanders of Forsyth, Little Miss India Cheek of Hawkinsville, and Miss Georgia Peach Lizzy Stanford of Cuthbert, also toured the Capital and had photos with various law enforcement officers. They were also treated to a special lunch by Rep. and Mrs. Robert Dickey.
These queens relinquished their titles on March 18 when the 2017 Miss Georgia Peach Queens were crowned at the Pettigrew Center at Fort Valley State University. Winners serve as official ambassadors of the Georgia Peach Festival in June and will be recognized by the Georgia legislature and Governor in Jan 2018. Any Georgia girl ages 4-24 is eligible.

Next-generation of scientists show their stuff at SCMS’ Annual…