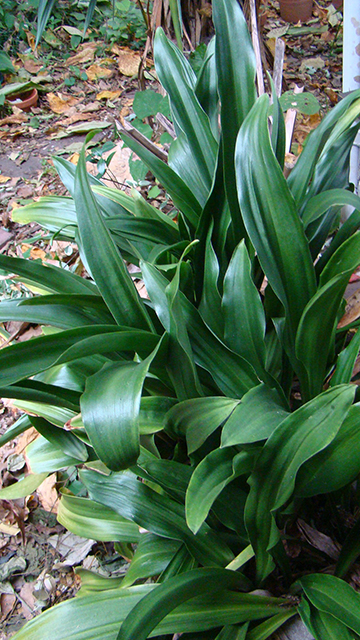 Rohdea is an evergreen perennial that will thrive in full shade. It is a good companion for hostas.

Question: Are hostas evergreen?
Answer: Hostas are deciduous. Their leaves die in the fall. While the idea of an evergreen hosta may sound great, please take pleasure in those fresh and unblemished leaves that arise each spring.
There are numerous options for adding wintertime green to your hosta planting, however. Some shade-loving evergreen perennials and sub-shrubs that you may want to consider are rohdea, cast-iron plant, poet’s laurel (Danae racemosa), butcher’s broom, ebony spleenwort, Christmas fern, little pigs/wild ginger, partridgeberry, grassy acorus and hellebores such as Lenten rose. A horticulturist at your local garden center may be able to point you to some other possibilities.
Question: I discovered what looks like a dirt dauber nest on my porch. However, it has only two sections and they look like tiny jugs. Do you know what it could be?
Answer: It sounds like the nest of a potter wasp. Potter wasps are related to dirt daubers/mud daubers and create exquisite mud structures that look like clay urns, jugs or vases. Most people wouldn’t recognize an adult potter wasp if they saw one, but the little mud pots it makes are unmistakable. Potter wasps often build their nests on a leaf or stem of a plant.
When some people hear “wasp” they panic, but potter wasps are not aggressive and have even been described as mild-tempered. Although the females are capable of stinging, they reportedly don’t even defend the nest if disturbed and sting only if handled.
Potter wasps are considered a beneficial insect to gardeners and farmers because they collect small caterpillars to stuff into those little jugs to feed their developing young. The adults feed on flower nectar and in in doing so may also perform some pollination, but their main benefit is in helping keep pest insect populations down.

Q: How long should a newly planted tree be staked?
A: You should never stake a tree unless it is in danger of falling over. If you must stake a tree, the stakes and supports should be removed as soon as possible and definitely within one year. If the tree is not stable by then, you need to plant another tree. Long-term staking will lead to a weak tree. Also, you are likely to forget the tree is staked, and five years later you will find wires cutting into the trunk, severely damaging the tree. We have seen this happen many times.

Q: My family and I are going camping. Do you have advice for making sure food in the cooler stays safe?
A: Keeping perishables cool is essential to avoid the food from becoming unsafe. Bacteria multiply rapidly at warm temperatures, and food can become unsafe if held in the “danger zone” (40 to 140 degrees F.) for more than two hours. If the outdoor temperature is above 90 degrees F., food can become dangerous after only one hour, so pack the cooler containing perishable foods with plenty of ice or frozen gel packs.
If you are packing canned or bottled drinks, it may be best to put them in a separate cooler. There are several reasons for this. If they are warm when you pack them, they will raise the temperature in the cooler making it more difficult to achieve and maintain the proper temperature for the perishables. People may open the cooler more frequently to get drinks, also making it harder to keep perishables properly chilled. Finally, if you are storing a raw meat product for grilling, you do not want to risk cross-contamination.

Q:  What is creamline milk?
A: Creamline milk is milk that has not been homogenized. A line of cream will form at the top because cream is lighter than the rest of the milk and rises to the surface. Homogenization breaks fat molecules down to such a small size that they remain suspended evenly throughout the milk instead of rising to form the layer of cream.
Shake creamline milk before drinking or cooking with it. Creamline milk is not as readily available as homogenized milk. If you have never had any, you may want to give it a try. You may even get your children to drink more milk if you make a game about who gets to shake the milk before a meal or before they have a “shaken milk” milkshake for dessert.

If you have questions, write Arty Schronce (arty.schronce@agr.georgia.gov) or visit the department’s website at www.agr.georgia.gov.

Q: I recently saw a gardenia that did not look like a normal gardenia. It had only six petals instead of the cluster of numerous petals I am familiar with. Is this a new hybrid or even a gardenia?

A: Most Southern gardeners are familiar with double-flowered gardenias, but there are single-flowered ones as well. Two you may find at nurseries are White Gem and Kleim’s Hardy.

Although the single-flowered gardenia is new to you, it is not new. In the natural world, single-flowered forms of plants are the norm as they are more likely to produce seeds, and extra rows of petals are a waste of energy. In gardens and in florist shops, however, just as with the gardenia, the multi-petal varieties of peonies, dahlias, camellias, roses, carnations and many other flowers may be better known to most people than their single-flowered counterparts.

Q: I plan to grill steaks and chicken that have marinated overnight in the refrigerator. Can the marinade be used as a sauce on the cooked meat?

A: Using marinade in which raw meat has sat is an example of cross-contamination between the raw and cooked product and can lead to illness. If you want to use some of your marinade as a sauce for cooked meat, reserve a portion in a separate container before adding the raw meat. If you want to use marinade that has been in contact with raw meat, boil it for at least 60 seconds.

A more common form of cross-contamination that occurs when grilling is using the same platter or utensils that previously held or handled raw meat. This allows bacteria from the raw meat’s juices to spread to the cooked food. Instead, have a clean platter and utensils ready at grill-side to serve your food.

Q: I recently saw a red and yellow flower in bloom that was labeled as spigelia. Can you tell me more about it?

A: Spigelia (Spigelia marilandica) also goes by the common names of pinkroot, Indian pink and wormgrass. Spigelia is a beautiful and striking perennial with tubular flowers that range from ruby red to carmine on the outside and open at the end into six-pointed stars of buttery yellow or chartreuse. The plant gets about 12 to 24 inches tall and grows in light shade to almost full sun. It gets leggier and doesn’t bloom as readily in shadier spots. It likes moist but well-drained soils high in organic matter.

Spigelia usually blooms in May or June in Georgia. It is native from Missouri and Kentucky south to Florida, including Georgia. It is not commonly available in the nursery trade, but is worth seeking from specialty nurseries, native plant societies or sales at botanical gardens.

If you have questions about agriculture, horticulture, food safety or services or products regulated by the Georgia Department of Agriculture, write Arty Schronce (arty.schronce@agr.georgia.gov) or visit the department’s website at www.agr.georgia.gov.