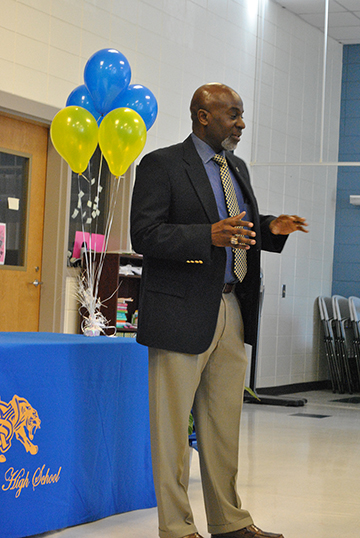 SUBMITTED PHOTO: Knighton addresses a group of students during a gathering at Americus-Sumter High School.

AMERICUS —Walter Knighton discovered his life’s passion in the bookshelves of the curriculum library at Fort Valley State University. As a graduate assistant, he became entranced with the many periodicals that discussed the process and history of education.
“I’ve always been fascinated by learning,” said Knighton, associate superintendent for Sumter County Schools. “I’ve always found interesting any process, structures, resources, or history regarding education.”
After being a teacher, an administrator, and a principal at Americus-Sumter County High School, when Knighton finally landed his current position overseeing curriculum, he knew he had finally arrived. “Everything I have done in my life has prepared me to be here today,” he said. “I love doing this.”
Because of his work and the work of the curriculum development teams he has assembled, no matter whose class they are in, students in Sumter County Schools are assured they are not missing vital educational components, especially in math and in English language arts. If there is a single hole in a child’s education in, say, third-grade math skills, that hole will get deeper and bigger as they continue through school, until eventually the child can’t dig his or her way out. Knighton and his teams have gone to great lengths to identify and plug the holes.
“The district has a responsibility to ensure that all students have a guaranteed and viable curriculum no matter whose class they are in,” said Knighton.
His efforts were recently recognized by the Georgia Department of Education as “exciting work taking place in Sumter County!” His comprehensive approach to looking at all grades from K-12 when studying curriculum was noted as “a great practice that could be used as a model for other schools in the region.”
Knighton brings to his job a wealth of experience as a teacher and administrator. When he first stepped into a leadership role, he saw that he could take what he had learned as a teacher and apply it across many classrooms.
“From a leader’s role, you can affect what happens to all the students, not just the ones in your class,” he said. “A lot of what I do is a culmination of who I am.”
A huge proponent of professional learning and mentorships, he believes teachers should always be learning, as he has always strived to do throughout his career.
“If there was ever any type of training offered to me, I’d go,” said Knighton. “Professional learning has allowed me to learn a lot about education from a lot of aspects.”
His background as a successful athlete landed him an early career as a football and track coach during his first few years teaching in Randolph County.
“When I started as a teacher, I never planned to do coaching,” he said. “That just came about as my being an athlete.”
As coach, he was remarkably successful, taking a historically losing program and posting a record of 8-2 in his first year, then 10-2 in his second year. But when an administrative position became available as the assistant principal of the elementary school in Randolph County, he abandoned his successful career as a head football coach to focus solely on students.
“Some people say I work hard, but to me, it just comes naturally,” he said. “It all just fits what I do and who I am.”
Knighton’s three keys to success life school
• Work hard
• Have a positive attitude
• Never settle for being average