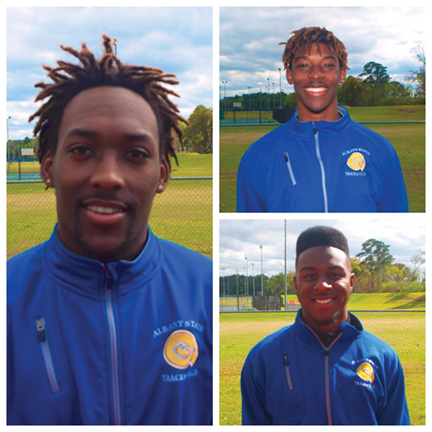 ALBANY- The Albany State University men’s track & field program has qualified three student-athletes for the 2017 NCAA Division II Outdoor Track & Field Championships. Jared Jordan, Cervantes Jackson, and Christopher Jackson will compete at IMG Academy in Bradenton, Florida May 25-27.
Jordan, a senior from Culloden, Ga., will compete in the 100- and 200-meter dashes. During the season, he recorded a time of 10.33 in the 100-meter dash and 20.79 in the 200 meters. Jordan won the SIAC championships in both events.
Jordan will be making his second trip to the nationals in three years.
Jackson, a sophomore from Bainbridge, Ga., will be making his second straight appearance at the NCAA nationals. He will compete in the men’s long jump, triple jump, and high jump. Jackson won the long jump at the SIAC championships and finished second in the triple and high jumps at the same event.
During the season, Jackson’s numbers include 7.59 meters (long jump), 15.64 meters (triple jump) and 2.12 meters (high jump). He won the SIAC Cleve Abbott Award, which is awarded to the top individual performer throughout the championship. He also was named the SIAC Men’s Field Most Valuable Performer.
At the 2016 nationals, Jackson finished fifth in the triple jump and received All-American honors.
Christopher Jackson is a freshman from Hinesville, Ga., and he has qualified to compete in the 100-meter dash. At the SIAC Championships, he recorded a time of 10.41 to finish second behind Jordan in the event.
To view more information about the 2017 NCAA Division II Men’s Outdoor Track & Field Championships, visit http://www.leonetiming.com/2017/Outdoor/NCAADII/, www.NCAA.com and www.NCAA.org.