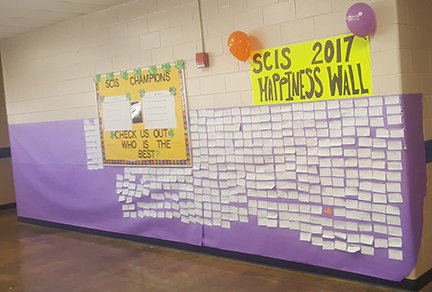 SUBMITTED BY SUMTER COUNTY SCHOOLS: The hallway of Sumter County Intermediate School was adorned with the students’ expressions of happiness this spring.

AMERICUS — In celebration of International Day of Happiness on March 20, Sumter County Intermediate School filled the wall of the cafeteria with happy thoughts. On walls decorated with purple paper, signs, balloons, and with happy music playing, (The song “Happy” by Pharrell Williams), students posted sticky notes describing what made them happy or how they could share happiness with someone else. They did this after teachers led a discussion in each of their classrooms about the concept of happiness.
The notes posted tended to suggest that happiness was achieved by making someone else happy. They included such thoughts as “Giving present to someone” and “Praying to God for my family,” as well as “Help people and share.”
“Happiness is something that feeds back on itself,” said Therese McCoy, a speech teacher at Sumter Intermediate School who set the idea in motion. “If you project happiness, you are going to get happiness.
“Nothing is going to make you happy,” she continued. “If you decide to be happy, then you act on that decision.”
McCoy stumbled upon the idea when she picked up a magazine dedicated to happiness while using the treadmill at Sumter County Hospital’s Health Club.
“‘Live Happy Magazine’ is a very upbeat and positive,” she said. “It encourages people to live happy lives. I bought a subscription for myself, then began giving gift subscriptions for my friends.”
“International Day of Happiness” was founded by the United Nations in 2012, and it includes a yearly list of the most happy counties and the least happy countries, as measured by a series of indicators. In 2017, Norway was listed as the happiest country, while the United States continued its steady slide down to 19th this year, after having been ranked as high as third in 2007.
A number of reasons were sighted for the decline, according to a report to the United Nations 2017 World Happiness Report:
“The predominant political discourse in the United States is aimed at raising economic growth, with the goal of restoring the American Dream and the happiness that is supposed to accompany it. But the data show conclusively that this is the wrong approach. The United States can and should raise happiness by addressing America’s multi-faceted social crisis — rising inequality, corruption, isolation, and distrust — rather than focusing exclusively or even mainly on economic growth, especially since the concrete proposals along these lines would exacerbate rather than ameliorate the deepening social crisis.”
Indeed, the countries at the top of the list tended to be countries that tended to look out for the social well-being of its citizenry, such as Switzerland, Denmark, and Sweden. Countries in Central Africa besieged with corruption, war, and economic hardship, tended to be at the bottom. 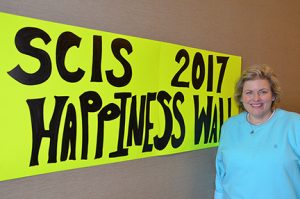 SUBMITTED BY SUMTER COUNTY SCHOOLS:
Therese McCoy, a speech teacher at SCIS, poses alongside a banner at SCIS, designating the hallway as “Happiness Way”.

Other factors in the American decline include the social tensions created after 9/11, mounting student debt and the increasing difficulties of attaining an education, and the increasing disparity between rich and poor. According to the report: “A small group at the top of the income distribution has continued to make striking gains in wealth and income, while the rest of society has faced economic stagnation or decline, worsening public health indicators including rising rates of drug addiction and suicide, and declining social trust.”
International Day of Happiness was founded by the United Nations in 2012. Since then, every March 20th, people all over the world are encouraged to consider happiness and its impact on our lives. We are also encouraged to think about what makes us happy, and about what we can do to spread happiness/well-being in our own communities, families, places of employment and schools.
For McCoy, the fundamental route to happiness is ensuring the happiness of others. “I believe in the teachings of Jesus Christ and believe we’re supposed to take care of each other,” she said.
It is sentiment oft repeated, including in the writing of Author Kurt Vonnegut in his book God Bless You Mr. Rosewater: “Hello babies. Welcome to Earth. It’s hot in the summer and cold in the winter. It’s round and wet and crowded. On the outside, babies, you’ve got a hundred years here. There’s only one rule that I know of, babies -” … you’ve got to be kind.”