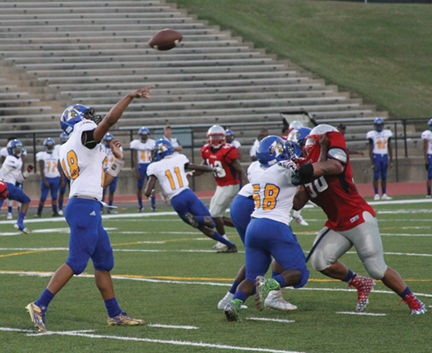 MICHAEL MURRAY I ATR: ASHS’ AJ Payne flings a long bomb to an open receiver as his teammates keep the Patriots’ defenders at bay during the Panthers’ Sept. 22 road test against Northside in Columbus.

With local schools closing their doors for the summer, graduation ceremonies concluding, and students getting ready to enjoy two months of much-needed rest and relaxation, it’s time to look back at the past 10 months and reminisce on some of the athletic highlights that this school year brought.
Football fans know that South Georgia is a proving ground for players with raw athleticism, and the grit and determination that the Americus-Sumter High School (ASHS) Panthers, the Southland Academy Raiders, and the Schley County Wildcats showed on the gridiron against a plethora of talented foes illustrates this point.
The Wildcats’ made a dramatic improvement last fall, under the guidance of new head coach, Darren Alford, who looked to turn the team around and improve on the previous year’s somewhat disappointing record. 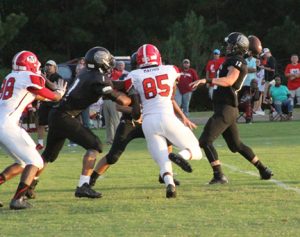 MICHAEL MURRAY I ATR:
Schley County quarterback, Will Barry, scans the field for an open receiver as his teammates hold off the Marion County onslaught during an Aug. 19 tilt in Ellaville.

Though the Wildcats still had a rough year on the field, Alford’s instruction made an impact on the team that was evident to any spectator, as the team showed marked improvement in their competition.
The ASHS Panthers saw their share of excitement on the gridiron last fall as well, with head coach, Erik Soliday, returning to take the reins for his second straight year. With Soliday’s hands on the wheel, the Panthers amassed their most promising record in years and earned a spot in the Georgia High School Association (GHSA) state playoffs for the first time since 2011. Though the Panthers dropped their playoff bout to the undefeated Thomson Bulldogs (who would eventually go on to compete in the state championship game), the experience gained by the team’s younger players in the high-pressure match-up will certainly pay off for the program in the next few years.
The Panthers saw a pair of team members, Eric Brown and Daveon Johnson sign agreements to continue to hone their gridiron skills at the collegiate level at the conclusion of the season. Brown will be playing for Fort Valley State next fall and Johnson will be playing for Tuskegee University. 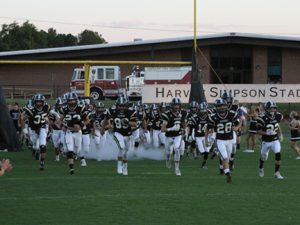 MICHAEL MURRAY I ATR:
The Southland Academy Raiders storm the field, ready to take on the Westwood Wildcats on Aug. 26 in Americus.

The Southland Raiders put up quite a fight on the gridiron last fall as well, bringing home exciting victories over several longtime rivals, including Southwest Georgia Academy, Westfield School, and Westwood Academy. Though the team narrowly missed a berth in the GISA playoffs, third-year head coach, Rod Murray, has been steadily conditioning the school’s athletes for the competitions that lie ahead.
Meanwhile, the Southland Academy Lady Raiders’ softball team were on their way to securing the number-two spot in Region 3-IAAA and a berth in the state playoffs. As a result of their performances on the diamond during the season, seven members of the Lady Raiders were named to the All-Region team.
At the same time, Schley’s Lady Wildcats softball team were well on their way to leaving their marks in the 2016 record books, remaining undefeated in Region 4-A after 16 contests before falling to Telfair County in the playoffs to complete their season with an impressive 19-8 record. 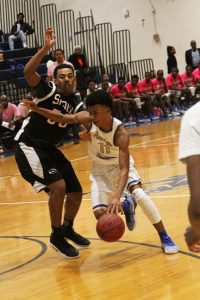 MICHAEL MURRAY I ATR:
ASHS’ Eric Hall blasts past a Shaw defender during the Panthers’ Jan. 31 test against the Raiders in Americus.

As the weather began to cool off and fall faded into winter, the community began to focus on basketball; arguably one of the most exciting seasons of the year for local sports fans.
He ASHS Lady Panthers made quite an impression on their Region 1-AAAA competition as they strove to defend the previous year’s state championship trophy. Entering the playoffs with an admirable record of 26-5, the Lady Panthers battled the Cross Creek Razorbacks in the first round of the state tourney, eventually taking a narrow loss to complete their season with an 26-6 overall mark. The Lady Panthers plowed through their new competitors in Region 1-AAA competition, however, taking down a series of new opponents in the freshly-realigned region to cap off the year with a 12-4 region record. 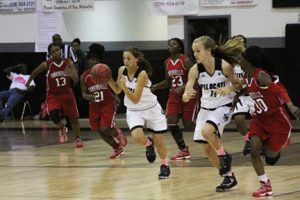 MICHAEL MURRAY I ATR:
Schley’s Carmen Phillips moves the basketball down the court during the Lady Wildcats’ Dec. 2 tilt against Hawkinsville in Ellaville.

The Panthers enjoyed similar success on the court in 2016-17, earning a spot in the GHSA state tournament with their exciting regular-season record of 21-6. Much to the chagrin of the local fans, however, the Panthers fell, once more, to the Thomson Bulldogs in round one of the playoff series to draw the curtain on their 2016-17 competition. The Panthers finished with a 13-3 mark in the newly realigned Region 1-AAAA.
The Lady Panthers saw a pair of team members sign scholarship agreements at the season’s end. Timia Swanson and Zari Mays each signed NLIs with Chattahoochee Community College, as did the Panthers’ Kiante Sims.
The basketball court wasn’t the only place on ASHS campus that was brimming with athletic potential, however, as Panther soccer player, Jonathan Abarca, signed a scholarship agreement with York College after attracting the attention of the school’s coach for his performance on the pitch last season. 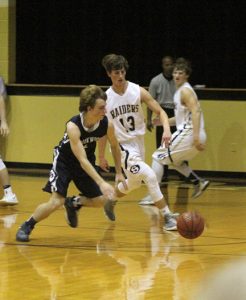 MICHAEL MURRAY I ATR:
Southland’s Alex Roach scrambles to gain control of a loose ball over a Brookwood player on Jan. 24 in Americus.

The Southland Academy Raiders and Lady Raiders both saw their share of action on the hardwood as well in the 2016-16 season, kicking off the action with a pair of victories over the SGA Warriors and Lady Warriors.
Both teams would go on to continue their momentum through the season, with the Raiders eventually winning eight Region 3-IAAA tilts, including the team’s first defeat of the Deerfield-Windsor Knights in Albany since the 2003 season.
Though neither squad would have the opportunity to progress into the state playoffs, both the Raiders and Lady Raiders saw marked improvements in their season records last year; a trend that many local sports fans hope will continue. The Raiders capped off the 2016-17 season with a 19-8 overall mark while the Lady Raiders drew the curtain on their season at 15-8.
That wasn’t the only thing Southland’s students were up to, however, as the school’s wrestling team was on a winning streak of their own; one that earned the team a second-place finish in the state tournament, held at Georgia Southwestern State University. The Raiders also had one athlete, Cole Landreth, earn his second consecutive state crown at the tourney.
In the meantime, the Schley County Wildcats were busy showing a drastic improvement over their 2015-16 performance on the hardwood court as well, amassing a 15-13 record that landed the team a spot in the playoffs for the first time in recent memory thanks, in part, to the leadership of head coach, Ernest Scott. 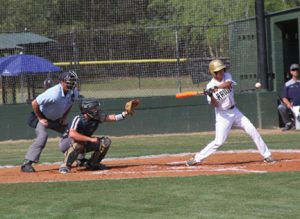 MICHAEL MURRAY I ATR:
Southland’s George Wall takes a swing at a fastball during the Raiders’ April 11 match-up against the Tiftarea Panthers in Americus.

The Lady Wildcats saw their share of struggles on the court this year after losing a few key players to graduation following the 2015-16 season, but the school’s young squad will likely return to the court next season with valuable experience under their belts, ready to start anew.
For his role as a senior leader on the Wildcats’ basketball team, Schley’s Ja’Marcus Scott, was offered a scholarship agreement to play basketball for Lagrange College, which he eagerly accepted.
Eventually, as the flowers started to bloom, area baseball players dusted off their jerseys and bats and began to prepare for their upcoming battles. 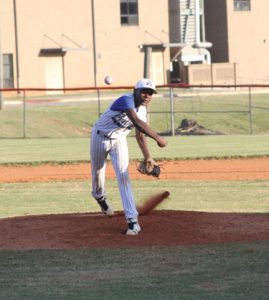 MICHAEL MURRAY I ATR:
ASHS’ TJ Rush turns up the heat as he serves up a fastball to a Taylor County batter on March 9 in Americus.

The Southland Raiders continued their tradition of bringing tough competition to the diamond this season, earning several significant victories over some tough region competitors as well as some non-region foes, notably the Westfield Hornets, whom the Raiders defeated during the regular season before going on to face them again in the playoffs. Unfortunately for local baseball devotees, the Hornets stepped up their game in the meantime to put the Raiders away in the playoffs, ending their season with a respectable 10-8-1 record.
Of course, the Schley County Wildcats’ advocates saw reason to celebrate recently, when the Schley crew defeated Gordon Lee in the championship doubleheader to earn the state title.
As the close of the season drew near, four of the Schley squad’s seniors, Chase Patrick, Reid Ragsdale, Clint Sellars, and Will Barry, signed agreements to continue honing their skills on the collegiate diamond next spring. 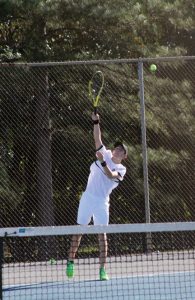 MICHAEL MURRAY I ATR:
Southland’s Gray Torbert launches a serve to a Crisp Academy opponent on MArch 8 in Americus.

Patrick signed with Faulkner University. Ragsdale agreed to play for Chattahoochee Valley Community College. Sellars and Barry both committed to Andrew College.
The ASHS Panthers saw their share of hardships this season, though the efforts of newly-appointed head coach, Steve Smith, were apparent in the team’s performance over the past few months and the team seems poised to continue this progress next season.