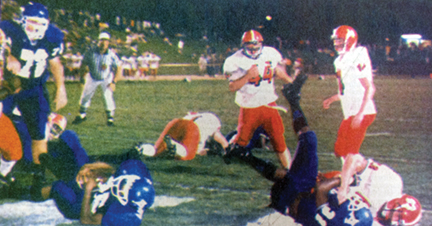 ATR FILE PHOTO; TAKEN BY STEPHEN CHESLIK: This photo, from the Sept. 6, 2000 edition of the Times-Recorder, depicts the action in the Panthers’ season opener against the Lee County Trojans in Americus. The original cutline reads: Americus High School running backs, Franako Smith (25) and Chad Holt (32) are down in the end zone, but it’s Smith with his arms protecting the football for a touchdown late in the first half of Friday’s game against Lee County at Finklea-Robinson Field. The Class AA Panthers mauled the Class AAAAA Trojans 26-7.

Editor’s note:
Here at the Americus Times-Recorder (ATR), we are very proud of our community’s fine history of athletic excellence.
Regular readers of the Times-Recorder will likely recall the paper’s Archive series from the past two summers in which we looked back on some action-packed historical chapters in local sports history. In the past, we’ve celebrated the anniversaries of the Americus High School (AHS) Lady Panthers’ 1966 state basketball championship win, the AHS Panthers 1965, 1975, and 1976 state championship wins on the football field, and the Southland Academy Raiders’ 1986 season that saw the team bring home the state crown.
This summer, however, the Times-Recorder will be taking another trip back in time, though this journey will not take us quite as far back as we have previously gone. We will be sharing and discussing the ATR’s coverage of another exciting period in local sports history, the 2000 and 2001 seasons of AHS football, in which the Panthers won back-to-back state titles; the school’s first gridiron championship wins in 25 years.
For years, the AHS Panthers had been trying to reestablish the team’s reputation as a powerhouse in Georgia High School Association (GHSA) football but, despite some spectacular seasons between the years of 1975 and 1999, the team had been unable to carry enough momentum to propel the team to a championship win.
With the turn of the millennium, however, came a fresh start for the AHS program that would, eventually, garner the team attention from all over the state once more.
————————

By MICHAEL MURRAY
In mid-August of 2000, as heat of summer was just beginning to fade and make way for the football weather of the fall, the staff members of the Times-Recorder as well as writers from all over the world, had their work cut out for them.
It was an election year and presidential candidates, Al Gore and George W. Bush, were engaged in a bitter struggle for the most coveted position in American politics.
On the home front, in Sumter County, there was an equally contentious race going on as incumbent, Randy Howard, and candidates, Nelson Brown and Robert Ingle were engaged in a tight contest to determine which of them would have the privilege of serving Sumter County as the community’s sheriff. The ATR’s coverage of the race showed clearly that there was no love lost between the three candidates as each attempted to gain the upper hand in the tight race.
The local sports scene was abuzz with the news that Americus native, Angel Myers-Martino, was training to vie for a spot on the US Olympic swim team after winning a pair of gold medals on the team in the 1996 Atlanta Olympics. The upcoming games were scheduled to be held in in Sydney, Australia. Though Myers-Martino failed to qualify at the Olympic trials and earn a spot on the team which would mark her third appearance at the Olympics, another competitor, 15-year-old Michael Phelps, would soon be making his mark in the history books as the youngest swimmer to participate in the Olympics as a United States swimmer in 68 years.
————————
On August 25, the AHS Panthers took to the field for the first time that year to engage the newly-formed Schley County Wildcats and the Dooly County Bulldogs on the gridiron for a Friday night scrimmage jamboree in Vienna.
The August 27, 2000 edition of the Times-Recorder included details of the games’ action in an article titled, “Field Goal helps Americus nip Dooly in jamboree”.
“After knocking off Schley County’s first-year Wildcats 24-0, in a pair of nine-minute quarters, the Bobcats bowed 9-7 to Americus’ Panthers on the final play of a similar session,” the article read. “Americus had earlier downed Schley 21-0. 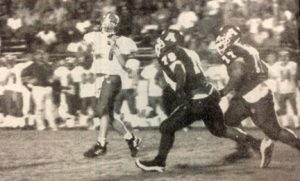 ATR FILE PHOTO; TAKEN BY STEPHEN CHESLIK:
This photo, from the Sept. 6, 2000 edition of the Times-Recorder, depicts the action in the Panthers’ season opener against the Lee County Trojans in Americus. The original cutline reads: Americus High School linemen, Tim Angrish (79) and Cedric Boone (77) give chase to Lee County High quarterback, Jesse Jones, during Friday’s win at Finklea-Robinson Field. This game further established a trend towards dominant defense in the Panther program.