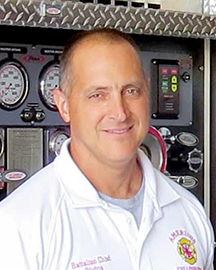 AMERICUS — Roger Bivins, a 25-year veteran of the Americus Fire Department, took over its helm as the new chief on May 31. He follows in the footsteps of former Chief Allan Erkhart.
Bivins, 48, is an Americus native, having grown up in the Taylor Street/Rees Park neighborhood where everyone knew everyone else and kids were in and out of every household. He graduated from Americus High School in 1986, having played the outfield on the Panther baseball team (regional champs).
After attending Georgia Southwestern College “briefly,” Bivins joined the U.S. Army. “At that time, college wasn’t for me,” he said. While in military service, he was stationed at Fort Bragg, N.C., then deployed to Honduras and ultimately to Bad Hersfeld, Germany. He served four years and reached the rank of corporal. He started in communications and ended in security.
Bivins’ military service prepared him for the fire service. “It’s the same rank structure,” he said. “The fire department is called a paramilitary organization because we follow the same chain of command … system. It’s just a natural fit for us.”
Following his military service, Bivins returned to his hometown to try college again, working at the same time “to make ends meet.” He married the former Sheila Grimsley of Ellaville a year later.
He started with the Americus Fire Department in November 1992, when Morris Smith was chief. He went to EMT school and attended classes “here and there” at GSW, ultimately earning an associate’s degree in fire science. He’s currently working on a bachelor’s in fire administration at Columbia Southern University.
Starting as a firefighter, Bivins said the rank structure and the variety of tasks appealed to him and weighed into his decision to join the fire service. “It was something different every day, and being able to go out and help people” were important factors in his decision, he said. “And that adrenaline rush when you get a serious call, an interesting call.”
After five years, he advanced to engineer, which he said he “loved,” but “typically when you drive the truck, you want to go back to going inside the fires.” The next step was captain where he worked for eight or nine years. When Allen Erkhart was named chief, Bivins was promoted to battalion chief where he was for a decade, before being named chief earlier this spring.
Bivins was asked what changes he’s seen in his quarter-century career. “The biggest difference is the type of fire swe face,” he said. “Everything’s made of plastic which burns hotter with darker smoke … But fires are a small number of our calls. We respond to all accidents, water leaks, trees and power lines down, odors, lightning strikes … ”
Bivins commented on some of the highlights of his career so far. “The friendships … the bonding, helping others. Going out during the flood (July 1994) and after the tornado (March 2007). Being able to help citizens and the community. And achieving the ISO rating.”
The ISO rating for the City of Americus is now 2, and as recently retired Chief Erkhart said, it could go to 1 soon.
“My goal is to be a 1,” Bivins said. “That depends on ‘is it advantageous to invest to get there or … we may be able to get there without spending any more money.’” He said he’s about to do an analysis in his department to determine where they stand in the process, and they will prepare for going to 1 either way.
“There are a lot of factors that go into that,” he said, such as personnel, response time, water supply in hydrants, location of fire stations, the 911 Center’s staffing, equipment and training.
“The City’s very good about giving us the equipment and whatever we need to do our job,” he said, adding that they never ask for anything that is not absolutely necessary.
When Americus Fire & Emergency Services personnel are not training, cleaning the fire stations or maintaining equipment, there are performing “all other assigned duties,” which can include putting up and taking down banners, flags and Christmas lights downtown, as well as other tasks.
The department also offers free smoke detectors and installation for local residents. Bivins said he knows that in the last 25 years, fire personnel have been to every single residence in Americus, knocking on doors, about smoke detectors.
The department also holds an annual barbecue which has raised funds for the past couple of years to purchase uniforms for the Honor Guard, and for clown shows. The shows, a longtime tradition for the department, are taken to local schools during Fire Prevention Month in October. The clowns, which are volunteers, also take the Fire Safety House into the schools. Some fire personnel do fire puppetry, as Bivins has done.
Bivins is prepared for his new role as fire chief. He’s been readying for the past 25 years to manage a budget of just over $3 million.
When asked his favorite part of the job, Bivins said, “I enjoy coming to work and interacting with people. … I love going out to the schools, and in the public. When going on calls, if you make them smile when they’ve been crying, that makes all the difference in the world.”
Bivins is a deacon at Ellaville Baptist Church and has served as chairman for Relay for Life twice and co-chair. He serves on the Scott Law Foundation board of directors and has long volunteered to coach softball, baseball and football. He and his wife live in Schley County and have two children, a daughter in college and a son in high school. He also owns Watson’s Christmas Tree Farm. He enjoys hunting and fishing and the beach.
Of the employees of the department, Bivins says, “They are the best in the state. They go above and beyond to do it.”