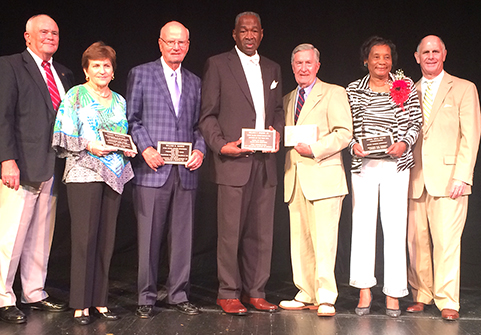 AMERICUS — Five outstanding Americus-Sumter County citizens that have gone above and beyond to better the community as a whole were officially inducted into Americus’ Walk of Fame during impressive ceremonies at the Rylander Theatre Sunday afternoon.
The City of Americus’ 2017 Walk of Fame recipients are Nelson Brown Jr., William S. Harris, George B.  Hooks and Annie Bell Moss, all of Americus, and the late Peggy Sheppard of Andersonville. They were recognized for their achievements and applauded by a crowd of more than 100 of their friends and relatives in attendance.
Americus Mayor Barry Blount said, “The Walk of Fame reminds me that Americus is a very special place.” Blount reviewed the significant contributions the recipients made over the years and presented each an engraved plaque. Sheppard was honored posthumously, and the award presented to Sandra Treadaway Smith.
Handsome engraved bronze plaques with their handprints and achievements are imbedded in cement pavers on the sidewalk in front of the historic theater, where they join others in Americus’ elite Walk of Fame.
“What is it that motivates these leaders to ‘step up to the plate’ to make Americus and Sumter County a better place to live and work?” asked state Rep. Bill McGowan, D-Americus, introducing Blount.
Using the first letter of their surnames, McGowan itemized four characteristics they share: bravery, heart, concern and love for the area, mission and success. “They all have a niche,” he said, “and worked tirelessly in their efforts that have affected countless people here and beyond.”
Steve Kennedy, city manager, introduced McGowan, a Sumter County native, pointing out he has been involved with government in one way or another for the past 60 years, including mayor of Americus.
The ceremony closed with remarks delivered by Terri Wooden, a member of the Walk of Fame Committee, and opened with a warm welcome given by Cecil Horne, chairman of the committee. Others committee members are Marvin Harris, Debbie Smith and Tommy Harrell.
A reception honoring the inductees followed in George’s Soda Fountain at the theater.
Brown, a lifelong resident of Americus, is a member of Americus city council, representing District 2. He is a former law enforcement officer with Americus Police Department and Sumter County Sherriff’s Office and has received countless awards given for his work in law enforcement, public service and government, church and civic organizations.
Harris, an Americus businessman, is a graduate of Americus High School and Georgia Institute of Technology, Atlanta. He continues to be actively involved in the community serving as a leader on varied boards and organizations. He is former president of Sumter Bank and Trust, and former chairman of the board of Glover Wholesale Co. He is an active member of Americus’ First United Methodist Church.
Hooks is a sixth-generation Sumter Countian and Americus businessman. A Democrat, he served this area in the Georgia General Assembly for 32 years, serving as state representative beginning in 1981, and then elected to the state Senate representing the 14th senatorial district. During that time, he was a member and chairman of the powerful Senate Appropriations Committee from 1993 to 2002. He served on the Georgia Board of Regents in 2013. He is an active member of First Baptist Church and knowledgeable about the history of Sumter County.
Annie Bell Moss, an Americus native, is a humanitarian. She founded Open Hands Ministry 28 years ago and has since faithfully supported its ministry. She has supported its mission by feeding the hungry, healing the lonely and broken hearted, clothing those in need and helping the unemployed on a daily basis. She has received countless awards and recognition from a broad area.
Peggy Sheppard, a native of New York state, adopted Sumter County as her home in the late 1940s, moving here with her husband Fred Sheppard. She was a classroom teacher for more than 20 years and later worked tirelessly until a few years before her death in 2015, to increase tourism to Andersonville, Sumter County and South Georgia area as a whole. She was a writer/editor, having published three best-sellers written about significant sites in Sumter County. She played an important role in establishing the Andersonville Trail, a 90-mile scenic route through six counties.