AMERICUS — Sumter Electric Membership Corporation held its 79th annual meeting of members on June 10 at South Georgia Technical College in Americus. Members and guests were entertained by the Dayspring Trio performing Southern gospel music. Total attendance, including 427 registered members, is estimated to have exceeded 700.
Following the recognition of special guests, Congressman Sanford Bishop, D-Albany, updated the members on legislative issues that impact rural Georgians. He noted that he supports energy policies that protect consumers from exorbitant electric power bills. He added that he voted against a carbon tax which would increase not only the cost of electricity, but many other household products, and concluded by saying he will fully weigh the costs and benefits of any regulations in Congress that affect the lives of rural Americans.
Chairman Bob Jernigan then addressed the members regarding the success of the cooperative business model. He reminded members that in the 1930s the federal government and electric cooperatives formed what has proven to be one of the most successful public/private partnerships in our nation’s history. That partnership enabled local co-ops all across the country to provide rural communities with reliable electric service at the least possible cost. The local cooperatives, in turn, formed a network of larger state and national cooperatives based upon mutual goals and shared services to provide the purchasing power local cooperatives needed to succeed as electric power providers. He added that the strength of the cooperative business model and the network of sister cooperatives have enabled local, not-for-profit electric cooperatives to serve sparsely populated rural areas in the United States for 80 years and positioned them well to continue serving consumers for the foreseeable future. Jernigan then paid tribute to Milton Hagerson, who died in July 2016.
“Milton Hagerson was a beloved member of the cooperative family who represented the members of Sumter County on the board of directors for 22 years. The 2016 annual report is dedicated to him in deep appreciation for his years of service and his lifelong support of the cooperative program,” Jernigan stated. He concluded his remarks by thanking members for their continued support of the cooperative.
Following the chairman’s report, President/CEO Ted McMillan focused primarily on the launch of Sumter EMC’s new Cooperative Solar program and the significant change it represents in the cooperative’s ability to meet the growing demand from consumers for renewable energy. He noted that Georgia’s cooperatives jointly formed Green Power EMC for the purpose of developing renewable energy resources, and in doing so, were the first electric utilities in Georgia to embrace solar energy. McMillan added details about Sumter EMC’s Cooperative Solar program and touted the program’s ability to deliver all the benefits of solar energy with none of the hassles and problems associated with a rooftop solar installation. Through participation in large utility-scale solar farms, Sumter EMC is enabled to deliver solar energy to its members across its distribution system grid.
McMillan mentioned a number of programs sponsored by Sumter EMC to encourage youth leadership development and announced that Sumter EMC will be sending two students, Garrett Botkin and Ronny Tucker, from Lee County High School on this year’s Washington Youth Tour. He then recognized Sumter 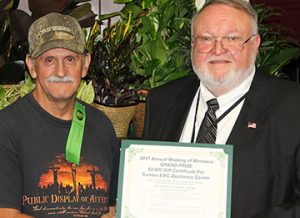 EMC’s applicant, Morgan Raylee Lamb, who was awarded a $1,000 scholarship from the Walter Harrison Scholarship fund. She is the daughter of Sumter EMC members, Randy and Angel Lamb of Plains, and she plans to use the scholarship in her pursuit of a pharmacy degree. He encouraged members to take advantage of a number of marketing programs offered and closed by thanking our state and federal legislators for their ongoing support of issues impacting rural Georgians.
Thomas J. Hunter from Preston won the grand prize, a $2,000 Sumter EMC gift certificate. Hattie L. Nealy 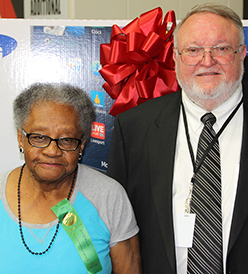 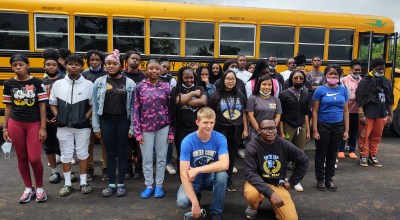