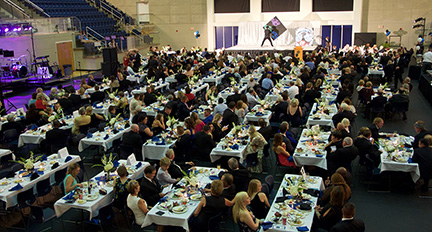 An overview shot of the inaugural Let’s Paint the Town Blue gala Saturday held to benefit the Smarr and Smith Foundation Inc. Renowned artist Dan Dunn is shown painting one of his remarkable works.

AMERICUS — Over $66,000 was raised at the Let’s Paint the Town Blue inaugural fundraising event held Saturday to benefit the Smarr-Smith Foundation. The event, held at the Storm Dome on the campus of Georgia Southwestern State University, sold out days before, demonstrating this community’s pledge to never forget Nick Smarr and Jody Smith, the two young officers killed in December 2016, in the line of duty. The final total of receipts will not be known until later this week.
Donnie McCrary, local radio personality, served as master of ceremonies. A silent auction, offering items from jewelry to weaponry, was from 6-8 p.m., netting $10,000.
Awards for the Officer of the Year were presented.
The Sumter County Sheriff’s Office’s Officer of the Year is Sgt. Keith Gary, a native of Sumter County and graduate of Americus High School and South Georgia Technical College’s Law Enforcement Academy.
According to Gary’s bio, he made a life-changing decision after listening to a speech his wife made after returning from a tour of duty in Iraq. Listening to her tell the audience that if she could go to Iraq at her age then they were not too old to return to school and follow their dream.
At the age of 57, Gary followed his dream and started to work for the Sumter County Sheriff’s Office in the jail. During his eight years with the Sheriff’s Office he has also worked with the Civil Division, Road Patrol and presently works in the Transport Division.
Lt. Terrell Coley was recognized as Officer of the Year for the Americus Police Department.
Coley was raised in Americus and graduated from Americus High School in 1973. Upon graduation, he served in the U.S. Army from 1974 until 1979. He joined the Americus Police Department in 1984, as a patrol officer and was promoted to the rank of sergeant in 1989, and again promoted to the rank of lieutenant in 2000. During his 33-year career as an Americus Police Officer Coley has responded to over 5,000 calls for service. He has served under nine different Americus Police chiefs and is viewed by the subordinate staff as a senior mentor who guides and influences those within the Americus Police Department, according to his chief. He earned a bachelor’s degree from Georgia Southwestern University, a master’s degree in criminal justice administration from Columbus State University and is a graduate of the Georgia Law Enforcement Command College at Columbus State University. Three of his five children have followed in his footsteps and are employed in the public safety sector.
Officer Nathaniel Milledge was named Officer of the Year for the Georgia Southwestern State University (GSW) Department of Public Safety.
A native of DeSoto, Milledge began his 30-year law enforcement career in 1986, at the Americus Police Department. He worked in the patrol division for seven years, and was then promoted to the detective division. He left the Americus Police Department and went to work for the Montezuma Police Department as corporal.
In 1999, he was employed at GSW. He left to be employed as assistant chief of the Ideal Police Department, but the Georgia Department of Juvenile Justice lured him away. He received several promotions while employed by the DJJ but felt his heart was at GSW, according to his bio. He returned to work there in 2013, and was promptly promoted to the rank of sergeant. He retains several State POST certifications Basic Law Enforcement, Basic Correctional Officer Supervision Levels 1, 2, and 3, Crime Scene Investigation, Field Training officer Certification Internal Affairs Investigation, among others.
“He has upheld a high work and moral standard wherever he has been. His work ethical standards are without question. He is a great person to deal with. His outlook, personality, and sense of humor make him a pleasure to work for or with. He is the guy we can turn to when things are looking really bad. Nate is an outstanding representative of our profession and we are glad we have him here at GSW,” said Mike Tracy, GSW Police chief.
Renowned artist Dan Dunn and his PaintJam was the evening’s entertainment. Displaying his remarkable talent, Dunn completed three works of art during the evening: one of a bulldog and one of the Beatles, both of which were auctioned. His third work, a portrait of best friends Nick Smarr and Jody Smith, is to be hung in the Sumter County Courthouse.

Dunn’s combination of his unique artistry and popular music make for an engaging performance, leaving the audience breathless. Dunn’s amazing work can be viewed on YouTube.

A buffet dinner was enjoyed during the evening. After the program, the tables were cleared in the Storm Dome for an after party and dancing to the Complete Desire band. 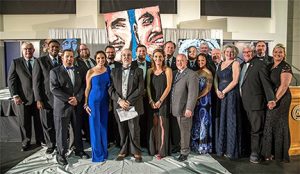 The committee that organized the inaugural fundraising gala for the Smarr and Smith Foundation Inc.

Committee President Chad Roberson offered comments from the podium, explaining how the Smarr-Smith Foundation was started. He said that shortly after Dec. 7, he and Russ Barnes met to decide how to make something positive out of the tragedy. The sheriff and the two police chiefs were also invited to a roundtable discussion with the committee. “It was exciting to see the desire to make this work,” he said, giving the committee the credit for getting the 430 people present at the gala involved in the foundation’s work. He said all the money raised will stay in Sumter County to be used for law enforcement scholarships and equipment and training for local law enforcement agencies.

Foundation Mission Statement:
“The Smarr and Smith Foundation was established to honor Nick Smarr and Jody Smith by insuring officers are given every opportunity to excel as they protect and serve Sumter County. The Smarr and Smith Foundation honors our community as we strive to live and love in Sumter County. Funds raised go directly to law enforcement efforts in Sumter County and will provide tactical equipment, training, scholarships and community events designed to cultivate and celebrate strong relationships between the Southwest Georgia residents and law enforcement professionals.”

The patrons for the inaugural Let’s Paint the Town Blue Gala, to benefit the Smarr-Smith Foundation Inc. are listed here.

Special thanks for the event were also extended to: