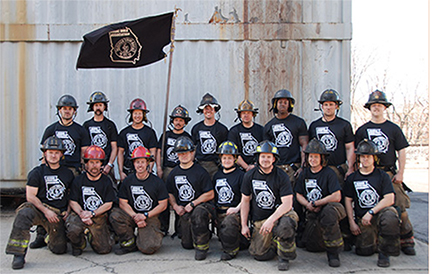 AMERICUS — Since the creation of the Georgia Smoke Diver in 1978, there have been 53 classes and 986 students completing the course.  The Georgia Smoke Diver course is a six-day, 60-hour program designed for the experienced firefighter who desires realistic training in self-survival, firefighter rescue, advanced search & rescue, thermal imaging, emergency procedures, teamwork, discipline, team leadership, situational awareness and decision making as well as how to function within the elements of the Incident Command System, and public service. The grueling training, which pushes the limits of the candidates both physically and mentally, is worth the efforts in the end. While being one of the most intense training courses a firefighter can experience, the final result is a more competent and confident firefighter, who is able to maintain composure in high stress situations. Candidates train for months and spend endless hours in firefighting gear preparing themselves for the challenge.
In the history of Americus Fire and Emergency service, there have only been a few of its members to join this elite fraternity of firefighters. The first Americus firefighter to earn the distinction as a Georgia Smoke Diver was in 1989 — Rene Guerrero, followed by Jeremy Tye in 1995, then Wes Beamon and Greg Hamlin in 2008. The individuals who have the commitment to attempt the course should be applauded for their efforts and those completing the course are deserving of the distinction to wear the Georgia Smoke Diver patch.
It is an honor to wear the black t-shirt seen in the picture because it is only worn by a Georgia Smoke Diver. After almost a 10 -year break, Americus Fire and Emergency Service is honored to acknowledge Engineer Scott Manucy for earning his t-shirt, becoming Georgia Smoke Diver No. 981, in the 53rd class in January 2017. Congratulations on well-deserved, hard-earned honor.