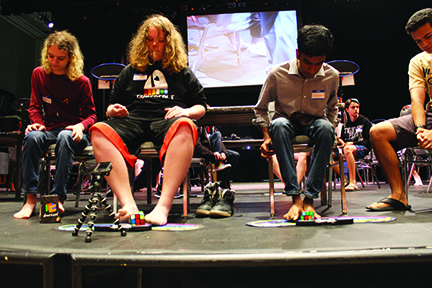 Joshua Cherian, shown second from right, competes with two other puzzle enthusiasts in the foot solving event during the 2017 Windsor Cubing Classic on June 25 in Americus.

AMERICUS — The 2017 Windsor Cubing Classic, held on the campus of Georgia Southwestern State University (GSW) on June 25, was a huge success.
The competition attracted 70 puzzle enthusiasts from as far away as New Mexico and Kentucky, with others coming from all corners of the Southeast to test their skills in a variety of events, including speed-solving, blindfolded solving, one-handed solving, foot solving, a variant of the puzzle dubbed “Skewb,” and another called “Rubik’s Clock.
Joshua Cherian, a talented GSW student who teamed up with the University and the Windsor Hotel to bring the event to Americus, recently sat down for an interview with the Times-Recorder.
Cherian said the event had gone even better than he had hoped. He said the competition, which was conducted according to the guidelines outlined by the World Cubing Association, attracted some of the most talented puzzle-solvers in the country. In fact, two North American records for foot-solving were set at the competition.
Tommy Cherry, a young “cuber” set the North American record for foot solving by arranging the puzzle’s colors in just over 28 seconds with his feet. Cherry’s recorded time in this event also earns him worldwide recognition as it is the world’s eighth fastest recorded time.
“His time here was as fast as some solves that I’ve done with my hands, so this is impressive by any standards …,” said Cherian. “It was the first time in North America [for a foot solve] set under 30 seconds … He was thrilled …”
Cherian went on to say that the individual who had previously held the record was also present at the event.
Ray Goslow, another competitor, set the North American record for the average of his solves, besting Cherry’s average time and earning the first-place win in that round of the tournament. Goslow’s average time earned him a sixth-place spot in the world rankings.
“I looked up our stats afterwards and we had 23 separate rankings in the North American standings for either singles or averages in every event we held,” Cherian said.
All of the times recorded at the competition were verified and submitted to the World Cubing Association.
Cherian said the competitors in the match-ups solved a total of 1,554 puzzles out of 1,657 attempts for a 94 percent success rate.
In addition to the action taking place on stage, spectators at the event were invited to help to create a mural, constructed entirely of precisely-scrambled Rubik’s Cubes that depicted the Statue of Liberty before a background of fireworks bursting in the sky. The mural utilized a total of 561 precisely-arranged cubes.
Solvers in each wave of the on-stage competition were provided with Rubik’s Cubes that had been scrambled to create matching patterns among all of the participants. In the foot solving competition, the puzzle solvers were allowed 15 seconds to inspect the cube before beginning.
Other events were conducted in a similar manner.
Fourteen volunteers donated their time to help ensure that the event was successful, and Cherian said that  many spectators had volunteered as well to help with the judging.
“The fastest average for the 3×3 in the final round was 10.86 seconds and the second-place was 10.87, so it was pretty good competition to say the least,” he said when asked how competitive the event had become.
Cherian said the competitors ranged in age from under 10 to over 50.
“We had some pretty good representation,” he said.
Asked how he was able to get the word out to puzzle aficionados from all over the United States, Cherian said, “The two main ways that we [informed people about the tournament] is through the World Cubing Association. We announced the competition there … and an Internet forum called speedsolving.com.”
Students from GSW’s Fine Arts Department donated hand-blown glass trophies to be awarded to the tournament’s winners.

“There were a few people from the community who came to watch the competition and went up to help with the mosaic … There were people who picked up the instruction booklets that came with the cubes that we used and they taught themselves how to solve a full cube … which was fantastic. That was exactly what we were hoping would happen,” he added.
Cherian said that since the competition was such a success, he is definitely excited to make it an annual or semi-annual event, which will hopefully grow and give GSW the opportunity to showcase everything that the university has to offer to a broader range of students.
Asked to sum up his experience at the event, Cherian expressed his excitement for the next time that the event will be held and enthusiastically concluded, “I think it’s only going to get better from here on out.”