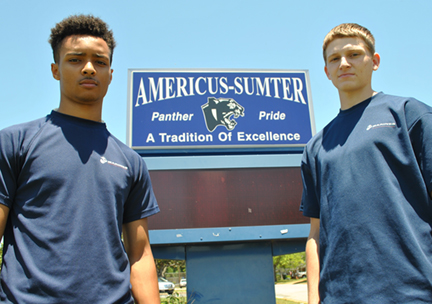 AMERICUS — Two Americus-Sumter High School (ASHS) seniors recently decided to become part of the few and the proud.
ASHS students John Martinez and Errix Stevens joined the United States Marine Corps after graduation. Martinez left on June 12, and Stevens says he will be on standby, that his call could come any day following graduation. “Literally within hours.”
Both recruits head to Parris Island, South Carolina, for 16 weeks of boot camp during the hottest part of the summer. “I’m nervous but excited,” said Stevens. “I’m ready to do something with my life, to be a great example for my community and the people I grew up around.”
Martinez says he has always wanted to be a Marine. “I chose the Marines because it’s a family tradition. My dad retired from the Marines, and his dad retired from the Navy. My plan is to stay in and retire, like my dad.”
Stevens says he his original plan was to join the army. “But I didn’t want to live in the shadows of family members who were in the army, so I chose the Marines instead.”
Both boys expressed gratitude for the friends and family who have supported them in the decision to join The Corps. Stevens says one person in particular had a strong influence on him. “My next-door neighbor, Luke Bennett, is a Marine. He never pushed me to join; he just set a good example. I like the way he carried himself, always confident and self-assured.”
Stevens says he and Bennett first bonded over the video game Call of Duty. “And our connection grew from there. He and his wife Toni threw me a birthday party when I turned 13. I have a lot to thank the Bennetts for.” Stevens added, “I will have my 19th birthday at Parris Island.”
Stevens said he will be going into aircraft maintenance. After Parris Island, he will attend Advanced Individual Training (AIT) for two months, and end up stationed in Virginia or California. Martinez hopes to enter the construction field. “Then I plan to go to college to become an officer,” said Martinez.