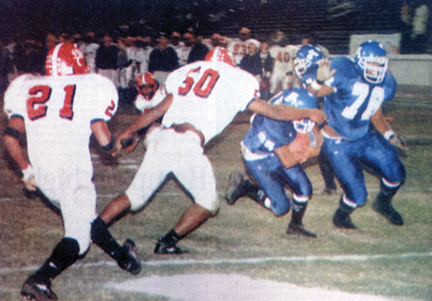 ATR FILE PHOTO TAKEN BY NICK STALLINGS: This photo, originally published in the Nov. 19, 2000 edition of the ATR, was titled, “TOUCHDOWNS OF ALL KINDS”. The original cutline read: Franako Smith is more used to scoring in the end zone as he ducks his head to avoid the arm of Brooks County’s George Davis (50). Travlis Sims (76) keeps Smith’s other side protected.

Editor’s note:
In the Americus Times-Recorder’s (ATR) exploration of the Americus High School (AHS) Panthers’ colossal 2000 gridiron season, as part of this summer’s “From the Archives” series, we have, so far, discussed the team’s first 10 wins of the regular season as the Panthers plowed their way into the state playoffs.
At last, we’ve reached the point where this story gets really interesting. With an undefeated record in Region 1-AA, the 2000 Panthers had made a name for themselves as a force to be reckoned with on the Georgia football field and the team had shown, repeatedly, that they had their eyes on the biggest prize in high school football.
In our latest edition of the “From the Archives” series, we discussed the Panthers’ final two blowout wins of the regular season, a 62-7 thrashing of the Albany High School Indians and a 52-13 conquest over the Seminole County Indians.
With these wins behind them, the Panthers immediately began their preparations for the state playoffs, in which the competition was certain to become much more aggressive.
———————

By MICHAEL MURRAY
In early November of 2000, many local schools were eagerly anticipating the upcoming basketball season, as all of the football teams in the ATR’s coverage area had recently wrapped up their gridiron campaigns… except for one, of course.
As families were beginning to make preparations for the upcoming holiday season, the ATR was busily reporting on the Sumter County Parks and Recreation Department’s 9-10-year-old football All-Star team, which had just won the semifinal round of the Georgia Region Invitational in Hawkinsville, in which the up-and-coming young gridiron squad had soundly defeated Cochran/Bleckley County 25-0.
At the same time, the ATR reported that the Sumter Players had begun working alongside Georgia Southwestern to stage a production of the Wizard of Oz while Sumter County Schools superintendent was reporting that the school system had shown marked improvement in their standardized test scores the past year.
The national headlines remained heavily focused on Miami-Dade County, Fla. and the manual presidential vote recount that would determine whether or not George W. Bush or Al Gore would have the opportunity to serve the country as the 43rd President of the United States.
None of this news, however, could eclipse the wave of excitement that had swept over Americus and Sumter County as the Times-Recorder dutifully reported on the team’s ever-expanding string of successes.
———————
After the Panthers capped off their regular season offensive, ATR sports editor, Matthew Brown, immediately set about informing readers of what was to come.
On Nov. 15, 2000, Brown published the first in a series of articles detailing the upcoming action for the Americus squad titled, “Coach not taking No. 4 seed lightly”.
In the article, he discussed the Panthers’ 1999 playoff appearance after the AHS crew bounced back from a rough start in the regular season to earn a spot in the post-season.
“This is significant because Americus, the Region 1-AA champions, is hosting the fourth-place team out of Region 2-AA, which is 4-6 Brooks County High,” Brown wrote. “The Trojans are coming to Finklea-Robinson Field for the first time since losing to the Panthers last season in a 1-AA game that helped propel Americus to the postseason [in 1999].
“So, this No. 1 vs. No. 4 game should be quite easy… Americus is on such a roll of late that head coach, Erik Soliday, has practically thrown in the towel for the other team by pulling his starters after the first half… Well, that 5-5 Americus team was the No. 4 seed from 1-AA in 1999, but was playing by far its best football of the season in the second half. That included a high-scoring loss to then-No. 1 ranked Mitchell-Baker in Camilla. The Panthers went on to take Swainsboro High, a top 5 team also, to overtime before the season came to an end.” 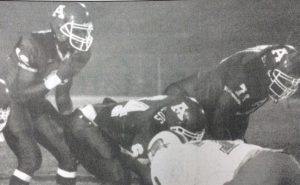 ATR FILE PHOTO:
This photo, originally published in the Nov. 22, 2000 edition of the ATR, was titled, “WHAT DOWN IS IT?” The original cutline reads: Robert Johnson, above, will go under center or in the shotgun on first down or fourth down, whatever it takes to get his Americus High School football team on the scoreboard. Joe Bruce, right, wasn’t in the first series of the Panther first round state win over Brooks County, but was the leading rusher with 141 yards.

Brown went on to remind readers that Brooks County had gotten off to a 1-6 start in the 2000 season and, much like the Panthers team of the previous year, would not be taking their berth in the playoffs for granted.
“No. 1 vs. No. 4 doesn’t necessarily mean a whole lot when it comes playoff time,” said AHS head coach, Erik Soliday in the article. “The regions are all different. So, it’s really like a new season. Everyone’s starting over.
“Brooks is playing the best ball it has all year right now. They have played a tough schedule, and right now they are playing good football. Fortunately, they were able to get some region wins late in the year and get on a roll.”
Soliday also conceded to Brown that the Brooks County Trojans may have been a slightly better team than the Panthers were in 1999 and that the Trojans and the 2000 Panthers were pretty evenly-matched in terms of size, as well as their multi-faceted attack on the offensive side of the ball.
“We’re going to have to be ready to play a full game,” Soliday concluded in the article. “This one’s going to be a war. I hope we can go out and execute and put a good game together. We’re definitely going to have to play the whole game.”
ATR news editor, John Suggs, Jr. got in on the excitement as well in the Nov. 17, 2000 edition of the ATR with a piece titled, “Americus begins state title run tonight”.
“Q: What’s blue and white and quivering with excitement tonight?” the article began.
“A: Americus High School.”
Suggs went on to write, “The anticipation can be felt throughout the school – from the front office to the cafeteria through every hallway and out the doors to the front lawn.
“The school is, in a word, charged.
“Charged and ready for what will prove, hopefully, to be just the first in a series of playoff games as the Panthers cast their eyes towards a state title.
Suggs included a brief interview with AHS principal, Juanita Wilson, who told him, “I think this is a real significant game for us… We were in this same place 25 years ago.”
Wilson was referring to the 1975 Panther team that swept the season with an undefeated record and earned the state championship trophy.
Suggs continued, “Although she would not further compare the two teams or dare to make a prediction of duplicating that success of a quarter of a century ago – superstition has a strong place in sports, and counting unhatched chickens isn’t a good idea anywhere – Wilson did express confidence in the team and pride in the school’s spirit for the team.”
For the article, Suggs also interviewed AHS cheerleading coach, Heidi Goodin, who said, “We have a big pep rally planned… We’re making lots of signs and we’ll have spirit contests throughout the day… We’re really excited,” she said. We’re really looking forward to seeing what they can do.”
“The players are a little more amped than usual,” added senior cheerleader, Dee Glover. “They know every game could be their last.”
Deeper in that same edition of the ATR, Brown elaborated a little on the Panthers’ upcoming tilt with an article named, “Panthers begin title quest”.
“As the No. 3-ranked team in the state, there are only two teams in the AA classification that could make the Americus High School football Panthers an underdog,” Brown wrote. “So maybe it doesn’t really matter who lines up on the other side in the first round of the state playoffs tonight at Finklea-Robinson Field. 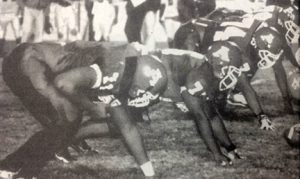 ATR FILE PHOTO TAKEN BY NICK STALLINGS:
This photo, titled, “FEEDING FRENZY” was originally published in the Nov. 23, 2000 edition of the Times-Recorder. The original cutline reads: The Americus High defensive line (from near to far) of Marcus Campbell, Warren Gooden, Eddie Sims, and Tim Angrish, should be chomping at the bit to attack the East Laurens wishbone offense Friday, even after a hardy Thanksgiving meal the night before.