‘Americus the Beautiful’ to shoot here for HGTV 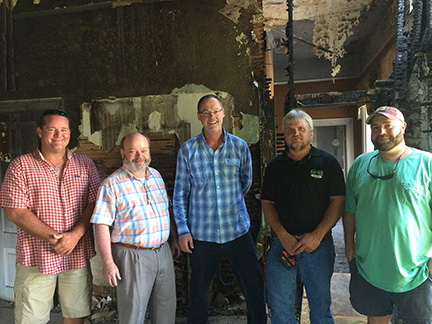 AMERICUS — An antebellum house at 402 West College St. is a virtual beehive of workers scurrying about to restore and improve the two-story structure, making it camera-ready to air on HGTV, the popular home and garden television network, before the end of this year. The show title is “Americus the Beautiful.”
Built in the 1850s and remodeled numerous times, even surviving an attic fire a couple of years ago that did significant damage to the second story, one can only imagine if the house had eyes and ears what it has seen or heard over the span of its 180-year existence.
The house has been vacant and unoccupied since former owners Brad Ray and Tim Lewis moved across country to the state of Washington two years ago. During that time, the structure has deteriorated even more from being unoccupied.
Several months before leaving Americus, Lewis and Ray put the property on the local real estate market but were unsuccessful in finding a buyer, and donated it to the Americus/Sumter Transient Housing Ministry, a non-profit organization; however, the organization decided another property would be more suitable for its purposes.
Meanwhile, HGTV contracted with EQTV (Essential Quail Television), a production company that specializes in producing innovative home, food and lifestyle programming for television networks worldwide, to produce a pilot film on the progress of the extensive restoration that is currently underway on the two-story house, a classic example of the unique architecture found in Americus’ historic residential district. 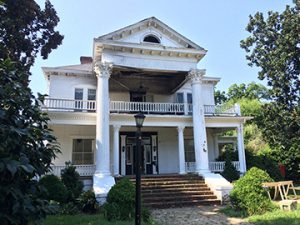 Greg Quail, an EQTV executive and producer of the pilot film, is an award-winning American and Australian television producer with offices in Los Angeles and Sydney. He was in town Friday morning and invited the Americus Times-Recorder to join him and principals involved in the restoration on a tour of the 4,800-sq. ft. house. He spoke freely over the sounds of the demolition work about restoring each of the 10 rooms.
It is obvious Quail is a professional at giving old houses a face lift, as he led the group throughout the rooms on both levels, pointing out details that are original, such as the flooring, some of the doors and oak fireplace mantelpieces and what is salvageable and what is not.
“This house is amazing — just beautiful, and I think it will look even more spectacular following restoration,” says Quail, saying he anticipates it will take six to eight weeks to complete the work. “Everyone on the job is local,” he says. They are Wayne Bozeman of Wayne’s Electric Co., and Kris Bowden will do the re-roofing. Bobby Smith, owner of Robert Smith Construction Co., Columbus, is “star of the show” and general contractor. Joel Rizor of EQTV is executive producer of the show, Brenton Metzler of Los Angeles, the show runner, and Michelle Howe of Texas, an interior design consultant.
“Our intention is that the show air on HGTV before the end of the year and has successful viewer ratings; we’ll return to Americus and restore more houses,” says Quail.
Entering the house from the wood and glass front door thought to date back to the 1850s, the room to the right of the central hallway and once called the front parlor, suffered water damage, especially the fireplace wall because it is directly beneath the upstairs bedroom that burned, says Quail. This wall was removed and now opens up to the kitchen directly behind, leaving the fireplace wall to the original exposed brick.
“By doing this redesign, it will be a more comfortable and contemporary living space,” says Quail. “The kitchen will be completely gutted and redesigned.”
Other downstairs rooms that didn’t have water damage include the front parlor to the left of the central hallway; a large room directly behind that can be used as a formal dining room or large guest room and two smaller adjoining bedrooms that could be used for office space, a craft room or children’s nursery. There is also a bath, brick-floored laundry area and small hallway that opens out onto a deck with stairs leading to a spacious fenced back garden and outbuilding perhaps used at one time as a parking garage. A focal point of the garden is the large rock fish pond that Quail says will be restored and stocked again with colorful koi.
A beautiful carved wood staircase, thought to be a part of the 1870s remodeling, leads to an upstairs central hallway and four bedrooms, all of which have fireplaces, and baths. This area experienced the most fire and water damage but not so much that it can’t be restored, points out Quail, and the brick chimney will be repaired.
Charles Crisp, local real estate agent who is has knowledge of architectural features, said the house was originally a one-story Greek Rival cottage. It was remodeled in the 1870s into a Victorian style with the addition of the second floor, wide front porch and balcony. In 1909, a Mr. Bell, brother of Edwin Bell, added Corinthian columns and plate glass windows to make the house Neo-Classical, a design that was popular here at that time and perhaps to resemble the house belonging to his brother Edwin Bell and wife Cattie Singletary Bell on the corner of West College and South Lee street that today is owned by Charles and Kim Christmas.
Other long-time homeowners have been the Sam Lott Sr. family, the Bridges family and former Americus Fire Chief Steve Moreno and his family.