Envisioning the future: a theme for the present

AMERICUS — It wasn’t as if the Boys & Girls Club of Americus-Sumter County needed enthusiasm. Before the evening event, the annual Steak & Stake fundraiser, got underway, enthusiasm poured forth from informal conversations and greetings throughout the Student Success Center at Georgia Southwestern State University. Hundreds of supporters of the organization were on hand, to enjoy dinner, hear the speeches and affirm their commitment. It was a lively, animated gathering, and before the evening was over, enthusiasm on steroids rang from the rafters.
It began with the singing of the National Anthem by Valerie Bey, 2016 Americus Idol Winner. It grew with each additional introduction, and came to full volume when former President Jimmy Carter took the microphone to introduce the keynote speaker, Stacey Abrams, Minority Leader of the Georgia House of Representatives. The former president, a portrait in enthusiasm himself, reviewed the list of former speakers at the annual meeting, then, in introducing Abrams, called her “one of the most exciting speakers we’ve ever had.”
Abrams presented a passionate, sometimes urgent, call to support the work of the Boys and Girls Club and did not veer from that topic throughout her presentation. Citing her own upbringing by two parents (both of whom are Methodist ministers), she stressed that even the best of parents sometimes need help, and this is where the Boys and Girls Club can do so much. Taught the basics — go church, go to school, help others — Abrams challenged the crowd of community leaders who were gathered there to help the Club do what her parents did: remind children they have boundless opportunity and to take advantage of it.
Abrams told stories of her parents’ care for those who had less; they were always serving. And in fact, her entire speech was about service.
“I’m here tonight because I believe in your work,” she said, then commented that her mother was a one-person boys-and-girls club for children who needed help. “We don’t need more kids who don’t know what they can be, what they can achieve,” she said.
In her closing remarks, Abrams mentioned that she was running for a job (governor of Georgia) that someone who looks like her has never had, but used this example to point out that the Boys & Girls Clubs — much like her own parents — give children a place to believe in themselves. “We can lift them up,” she said. “We can change their lives.”
Her speech was met with enthusiastic applause, and was followed by remarks from William (Bill) Harris Sr., who praised the speech, and noted how fortunate the organization had been over the years to have outstanding speakers. “But no one can top this one!” he said. He talked about the great push it gave the Boys & Girls Club when President Carter became involved here and in Plains.
The rafters rang again when Karla Heath-Sands, anchor at WALB TV in Albany and mistress of ceremonies for the evening, sang “Let There Be Peace on Earth (and let it begin with me).” It was a passionate, soaring rendition of the now familiar paean calling listeners to their better instincts.
Interim CEO of Boys & Girls Club of Americus-Sumter County Inc. Andrea Sartiano, was introduced. She spoke briefly about the work of the organization, making a plea for financial support, while thanking those present for all that they have done and are doing to keep the organization an important part of the community.

Shirley Green-Reese, retiring president of the board of the Boys and Girls Club of Americus & Sumter County Inc., was presented an award from the national organization Tuesday.

Shirley Green-Reese, Ph.D., retiring president of the board of directors of the Boys & Girls Club of Americus-Sumter County Inc., made closing remarks with several presentations and recognitions, including two members of the local Boys & Girls Club. The young girl who was recognized, instead of making a speech, sang a touching and passionate rendition of “Tomorrow” from the musical “Annie” — and the rafters rang even more.
As Reese was presiding over the closing ceremony, several awards and presentations came her way, including an award from the national organization presented by Nemin Jaya, director of Emerging Markets Program. President Carter was asked to make the actual presentation, and secured a lovely medal on purple ribbon around Reese’s neck. Bill Harris Jr., noting that in 19 years he had never heard such a good — and appropriate — message, presented a gift from the board and praised Reese’s leadership over such a long time. She recognized Board members, administrative staff and support staff.
The Rev. Melvin S. Colquitt, who had offered the invocation before dinner, closed the meeting with a brief, appropriate benediction. It was time for brevity. An important message had been delivered. Now it was time to get to work. 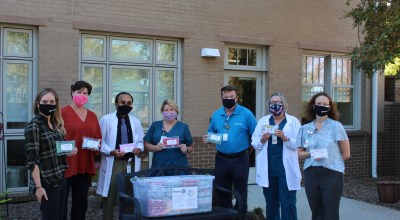 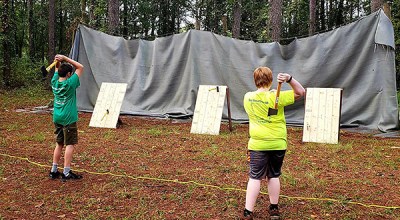 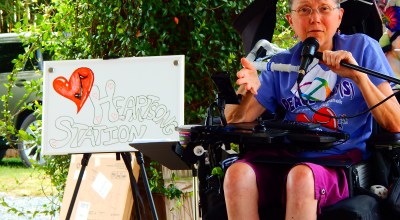