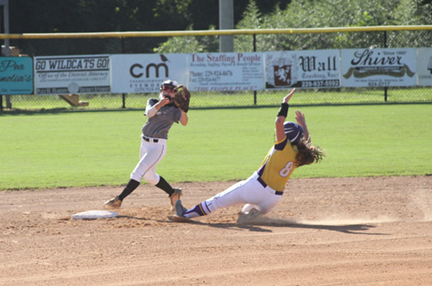 MICHAEL MURRAY I ATR: Schley’s Kelli Rees tags the bag just in time to put a Bleckley runner out at second base on Aug. 16 in Ellaville.

ELLAVILLE – The Schley County Lady Wildcats softball team has gotten off to a strong start in their 2017 campaign, jumping to 3-1 after two weeks of competition.
The Schley squad, under the leadership of third-year head coach, Jody Sellars, are currently 1-1 in Region 4-A.
The Lady ‘Cats kicked off the season in a tilt against the Emmanuel County Institute Lady Bulldogs on Aug. 7 at Middle Georgia State University’s facility. The Schley squad earned a 9-4 victory in their season curtain-raiser. 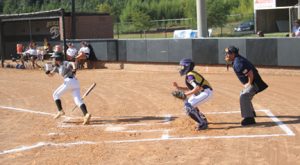 MICHAEL MURRAY I ATR:
Schley’s Laine Frazier takes off for first base after nailing a grounder during the Lady Wildcats’ Aug. 16 match-up against Bleckley County in Ellaville.

MICHAE MURRAY I ATR:
Schley’s Saige Whaley turns up the heat from the pitcher’s circle in the Lady Wildcats’ Aug. 16 tilt against Bleckley County in Ellaville.

Crawford added two more in the top of the sixth to narrow the gap, but the Lady Wildcats neutralized the threat with two more runners crossing the plate in the bottom of the stanza, earning the hosts the five-point victory.
Mindy Carol Register led the Lady ‘Cats from the plate in this contest, scattering three hits. Perri DeVane and Emily Campbell each batted in a pair of runners.
Saige Whaley and Frazier split hurling duties in the game, with Whaley dispatching three batters and Frazier fanning two.
On Aug. 10, the Schley squad hosted their second Region 4-A opponent of the year, the Brookstone Lady Cougars.
Despite taking an early lead in the tilt, the Lady Wildcats succumbed to a late Brookstone rally, suffering a 4-3 defeat.
Schley plated one runner on the bottom of the first before the Lady Cougars tossed a run on the board in the top of the third to even the score.
Brookstone added three more runs to their tally in the top of the fifth and held the Lady Wildcats to only one in the bottom of the same inning. The Lady ‘Cats looked to get a rally going in the bottom of the seventh, but were only able to score one more before a determined Lady Cougar defense put the game away.
Phillips collected a trio of hits for the Schley cause in the match-up and Register added one RBI.
Frazier pitched all seven innings, putting away one Brookstone batter.
The Schley squad began to turn their luck around on Aug. 14, taking an early 4-1 lead over the First Presbyterian Day School Lady Vikings. The game was postponed after the top of the first inning, however.
The Lady ‘Cats rode this momentum into a home tilt on Aug. 16 against the Bleckley County Lady Royals. The Schley girls won the non-region tilt in an 8-0, five-inning shutout.
The Lady Wildcats plated two runners in the first, one in the second, four in the fourth, and one in the fifth, all the while utilizing their defensive skills to keep the visitors off the board.
Alexis Bradshaw led the pack with three hits in the match, followed closely by Whaley and Frazier, who each contributed two. 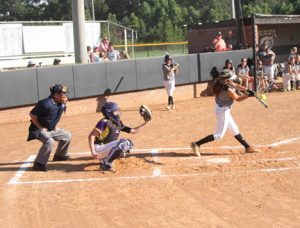 MICHAEL MURRAY I ATR:
Schley County’s Carmen Phillips connects on a hit during the second inning of the Lady Wildcats’ Aug. 16 tilt against Bleckley County.

Bradshaw and Kelli Rees each brought in a pair of runners and Whaley added one RBI. Whaley tossed all five innings of the match, putting away five prospective Bleckley batters.
The Lady Wildcats will put their record on the line again on Aug. 21, hosting the Perry High School Panthers in Ellaville. The Schley girls will resume Region 4-A competition on Aug. 22 when they hit the road for Manchester to take on the Manchester High Lady Blue Devils.

A word from Sumter Cycling: Looking for bicycling buddies?