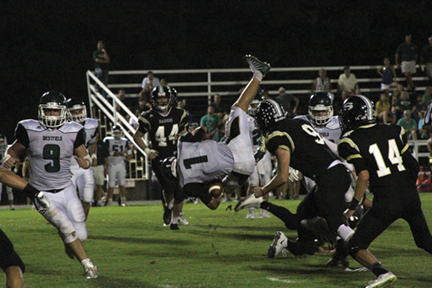 MICHAEL MURRAY I ATR: A Westfield rusher takes to the air following a jarring tackle by Southland’s Sam Copland in the second quarter of the Raiders’ Aug. 18 match-up against the Hornets in Americus.

AMERICUS – The Southland Academy Raiders football team hosted their first home foe of the 2017 season, the Westfield Hornets, on Aug. 18 at Harvey Simpson Stadium in Americus.
In their second tilt of the year, Southland jumped to 2-0 after dealing a 44-13 thrashing to the Hornets.
The Raiders quickly got the jump on their guests, scoring early and often as they worked to build up a 37-0 pad in the first half of the match-up.
Southland’s scoring spree began on the initial kickoff when Landon Law caught Westfield’s boot and bobbed and weaved through green-and-white clad defenders for an 80-yard touchdown 12 seconds into the game.
Southland place kicker, Zane Hines, then nailed the first of his six successful PAT attempts to put the Raiders up 7-0.
After holding the visitors to only four downs on their return drive, Southland struck again when the home team regained possession at their own 41 yard-line. Southland back, Clay Owens, took a handoff from quarterback, Alex Roach and made a 59-yard scamper down the left sideline to add another six-pointer to the Raiders’ tally.
The Hornets’ return drive was slowed by hard stops from Hunter McCain, Logan Morris, Brody Shattles, and Stephen Barnes.
After seven plays, the Raiders forced the visitors to punt from their own 40 yard-line.
Southland received the ball and Townsend Ray kicked off the next drive with a 13-yard carry, followed by a run up the gut by Owens that netted the team a pair of first downs.
Three plays later, Roach found Raider wideout, Sage Batten, open and hit him on the run for a 49-yard touchdown pass. Another successful kick from Hines left the Raiders up 21-0 with three minutes left in the initial frame.
Once again, the Raiders held the Hornets to three and out on their return, reclaiming the ball at Westfield’s 40.
Runs by Ray, Shattles, Roach, and Owens gained ground for the hosts, but the Raiders opted to punt after Roach was caught behind the line of scrimmage on third down.
Owens booted a long punt to their opponents’ one yard-line, setting the Raiders up to pick up a safety on the next play when Hunter McCain burst through Westfield’s defensive line to add another tackle to his numbers and secure three more points for the Raiders.
The Raiders scored again on their ensuing possession when Ray added yardage with a pair of hard runs to set up Owens for a 54-yard touchdown rush. 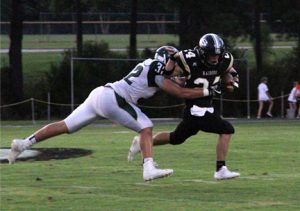 MICHAEL MURRAY I ATR:
Southland’s Clay Owens attempts to break a Westfield defender’s tackle on one of his many rushes in the first quarter of the Aug. 18 game between the Raiders and the Hornets in Americus.

The Hornets threatened on their return, but Southland’s determined defenders kept them from breaking deep into the red zone, holding the visitors to eight downs.
Southland put the first half away with 5:23 in the second quarter when, on the second play of the drive, Ray took off for another long one, an 82-yard six-pointer that left the home team up 37-0 (after Hines’ PAT) where the score would remain until the break.
The Raiders struck again on their second possession after returning from the locker rooms. On the first play of their drive, Roach found Batten open once more and launched the ball his way. Batten deftly pulled the ball in and took off for a 65-yard jaunt, leaving a trail of Westfield defenders behind, as he scored the Raiders’ final touchdown of the game.
Hines split the uprights for the sixth time in the match-up, leaving the hosts with a healthy 44-0 lead.
Early in the fourth quarter, the Raiders called up some of their reserve players to allow them to gain some valuable Friday night experience under the lights.
The Hornets scored both of their touchdowns in the fourth frame at the 7:16 mark and the 1:30 mark as the jubilant Raider fans celebrated the home win.
In total, the Southland crew covered 408 yards in the tilt, with 131 being added through the air on Roach’s four completions. The Southland defense held the visitors to only 200 all-purpose yards in the game.
Owens led the team on the ground, amassing 156 yards on seven totes, followed by Ray, who contributed 100 yards on four carries.
Batten led the team’s receivers, pulling in a pair of passes for 114 yards.
The Raiders will return to action on Aug. 25, traveling to Westwood School in Camilla to battle the Wildcats. The Raiders will return to their home turf on Sept. 1 to square off against the Heritage School Hawks, of Newnan.