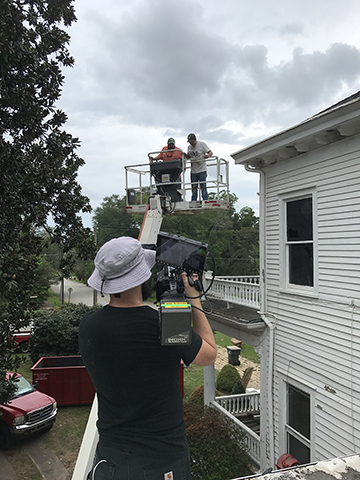 Filming began on the renovation work at 402 W. College St. on July 17.

AMERICUS — Restoration currently underway on the antebellum house at 402 W. College St. is causing quite a stir in the community. It is not the average preservation project that happens on a daily basis.
The difference is video cameras are filming the daily progress of the mammoth restoration project for HGTV that is scheduled to air on the popular network later this year.
And like all construction projects, this has a deadline, but tighter than most. However, work is moving rapidly and is on schedule.
“We’re on it,” said Brenton Metzler of Los Angeles, who is directing the daily schedule of work on the two-story house, a classic example of the unique architecture in Americus’ historic residential district.
As Metzler guided the Times-Recorder through a maze of lumber and paint cans while simultaneously dodging workmen hauling marble kitchen counter tops he quickly said the progress achieved since demolition began a month ago wouldn’t have been possible without the cooperation of the people in the local building industry. 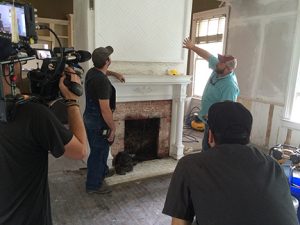 “These businesses have gone above and beyond to help us and we are greatly appreciative,” said Metzler ticking off a long list of trustworthy companies: Shiver Lumber Co., Parker’s Heating and Air, Americus Glass, Wayne’s Electric, Bobby Smith (owner of Robert Smith Construction Co., Columbus, general contractor), and Junque Yard Antiques of Columbus.
EQTV (Essential Quail Television), a production company specializing in producing innovative home, food and lifestyle programming for television networks worldwide, is under contract to film the restoration project for HGTV and Smith and his son, Crofford Smith and daughter, Taylor Smith, are featured in the show to be titled “Americus the Beautiful.”
Built in the 1850s and remodeled numerous times, the house survived an attic fire a few years ago but there was significant water and smoke damage to the second story rooms and a portion of the downstairs. The house has been vacant for the past two years after former owners moved to Washington State.  During this time, the structure deteriorated even more from being unoccupied.
“We have replaced all the fire and water damaged wood in the upstairs and downstairs rooms and replaced all the roofing with new shingles,” said Metzler. The drywall is complete throughout and we’re painting both the exterior and interior this week,” said Metzler during the room-by-room tour.
Metzler said in an effort to have continuity throughout the house a neutral shade of gray was chosen to paint the walls in all the rooms with pops of color in the dining room that is bluish gray while the upstairs study/library is painted artichoke green.
The large archway in the entry hall with attached Corinthian columns was removed and is being repurposed to create a unique bed that will go in the master bedroom. Fireplace mantles in the rooms both up and downstairs have been refurbished. The major change was the fireplace walls in the living room to the right of the entry hall and the adjoining kitchen because of the smoke and water damage. These rooms were refigured to be more comfortable and contemporary, a style that is suitable for families today. 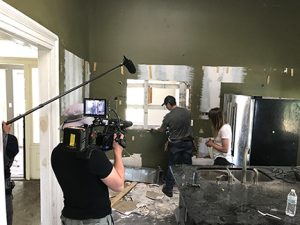 Work underway in the kitchen.

The kitchen was completely gutted and redesigned. New glass-front custom cabinets were painted an antique white, and marble countertops were installed. The kitchen island is also painted in the same soft creamy white for continuity, said Metzler.
The house was originally built as a one-story Greek Rival cottage. It was remodeled in the 1870s into a Victorian style with the addition of the second floor, wide front porch and balcony. In 1909, a Mr. Bell, brother of Edwin Bell, added Corinthian columns and plate glass windows to make the house Neo-Classical, a design that was popular at that time.