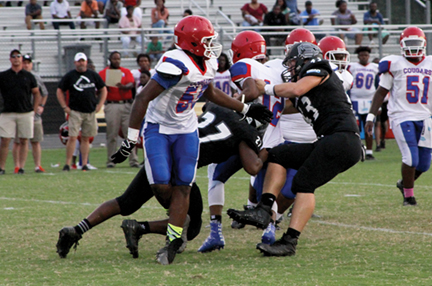 MICHAEL MURRAY I ATR: Schley’s Wayde Montgomery (43) and Johnathan Thornton drag down a Calhoun rusher during the first quarter of the Wildcats’ Aug. 25 tilt against the Cougars in Ellaville.

ELLAVILLE – The Schley County Wildcats faced the Calhoun County Cougars on Aug. 25 for their 2017 home opener, earning a 28-6 victory over their opponents.
With the win, the Wildcats improve to 1-1 on the season.
The Wildcats opened the scoring in their first official home tilt of the season and carefully guarded their lead throughout the initial half.
The ‘Cats held the Cougars to only six downs on their opening drive and retrieved the ball at their opponents’ 27 yard-line. Carries by James Baker, Tra Sampson, and Calvin Sims pushed the ball into their opponents’ side of the field but, on first and ten, the Cougars recovered a fumble to retake possession.
Once again, the Wildcats stalled their opponents’ progress due, in part, to expert tackles from Wayde Montgomery, Johnathan Thornton, and Dartavious Napper, coupled with a sack by Zykevious Walker.
The Wildcats took over the ball on the Calhoun 26.
Jakim Hart opened the next drive with a pair of runs that added 18 yards to the Wildcats’ tally, followed by hard rushes from James Baker and Alec Harris that landed the ball at the Cougar 47.
The Cougars then stepped up their defense, stalling the ‘Cats on the following three downs.
On fourth and nine, from the Calhoun 41, the Wildcats went for it and Baker took off with the ball for a 10-yard jaunt to keep the home team’s drive alive.
A trio of rushes by Calvin Sims put the Wildcats in the Cougars’ red zone and, from the 18, Ja’myron Clayton took off down the left side for an 18-yard touchdown.
Schley place kicker, William Blackwell, deftly split the uprights to give the hosts a 7-0 edge with 9:54 left to play in the first half.
After holding the Cougars to five downs on their return, the Wildcats embarked on another scoring drive halfway through the second quarter.
The progress began at the Wildcats’ 15 yard-line. A series of rushes from Sims and Baker, alongside a couple of penalties that favored the home team, helped the Wildcats get out of the danger zone and move the ball to midfield.
The ‘Cats continued to press forward on their drive, pushed ahead by more hard runs from Baker, Sims, and Tatum.
On first and ten from the 12 yard-line, Hart took the ball up the gut to leave the Wildcats looking at first and goal from the two.
From there, Hart repeated his performance, going the distance for the Wildcats’ second six-pointer of the tilt  with around three minutes left in the half.
Williams again nailed the PAT attempt to give the ‘Cats a 14-0 advantage that they would hold onto until the halftime break.
The Wildcats rode this momentum into the second half of the match-up, taking off on an eight-play drive, propelled by runs from Trent Davis, Sampson, Sims, and Baker, that moved the ball to the Calhoun 30.
To the dismay of the home fans, a fumble was recovered by a Calhoun defender at the 30 but, on the following play, the ‘Cats made up for lost ground when Derric Tatum picked off a Cougar pass and returned the ball to the 18.
From there, the ‘Cats utilized a pair of rushes by Baker to put Sims in position to score a seven-yard touchdown. Blackwell’s boot was, once again, on point, and the ‘Cats went up 21-0.
The Cougars looked to make their stand on their answering succession, but the determination of Schley defenders, Dartavious Napper, Trent Bivins, Alec Harris, and Wade Rodgers helped to slow their progress. On second and ten from their own 26, Calhoun quarterback, Jacquez Wade, launched a long bomb that Schley’s Sims swooped in on and intercepted at the Wildcat 35.
From there, the Wildcats embarked on a seven-play drive that landed them at the three yard-line and ate up the remainder of the time in the third frame.
On the first play of the fourth period, Baker burst through Calhoun’s defenses to score the Wildcats’ final touchdown of the tilt. One more successful PAT kick from Blackwell put the Wildcats up 28-8.
After the teams swapped possession two more times, the Cougars avoided a shutout with one minute left on the clock when Dre’shon Moore pulled down a nine-yard pass in the end zone.
The Wildcats squashed the Cougars’ attempt at a two-point conversion, leaving their lead at 28-6 where it would remain for the remainder of the game.
The Wildcats will have a bye next week and will return to the gridiron on Sept. 8 to battle Georgia Military College in Ellaville. On Sept. 15, the Schley crew will hit the road to test their skills against the Hawkinsville Red Devils.