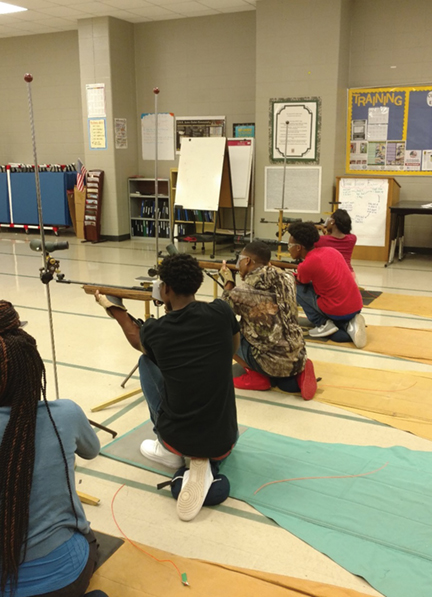 AMERICUS — The National Rifle Association Foundation has awarded the Americus-Sumter High School JROTC Air Rifle Program a grant totaling $3,500.45 to fund air rifle equipment, targets, and ammunition.
“We are very excited about our marksmanship program and gun safety course, and pleased that the NRA is making an investment in our community,” said 1SGT Seth Howell of ASHS. “This grant will allow the JROTC to familiarize cadets with safe gun handling procedures, thereby reducing gun-related accidents in the community.” Howell said the program helps to identify and train cadets who may excel enough to compete in air-riflery competitions at the varsity level.
Students are fond of the program too. ASHS JROTC cadet Kristin Wooden believes the grant will be helpful to students who want to try out for the rifle team. “It gives you a taste of what it’s like, to help you decide if you want to join. Mostly we learn about safety, but it’s also about marksmanship, how to handle guns, and proper procedure. Basically, how to avoid hurting other people. And it’s really fun to be doing something new.”
ASHS JROCT cadet Maliyah Clark said being on the rifle team gives students insight into real Army life. “I like the hands-on aspect. It’s different from sitting in a classroom,” Clark added. “We learn stability and breathing technique for three basic shooting positions: standing, kneeling, and prone.”
The NRA has a long tradition of assisting JROTC programs around the country. The NRA was established in 1871 and is America’s oldest civil rights and sportsmen’s group. Five million members strong, the NRA continues its mission to uphold Second Amendment rights and is the leader in firearm education and training for law-abiding gun owners, law enforcement, and the military in the United States. The actions of the NRA are designed to promote firearm and hunting safety, to enhance marksmanship skills of those participating in the shootings sports, and to educate the general public about firearms in their historic, technological, and artistic context. The NRA Foundation is a tax-exempt organization founded in 1990 to defend and to foster the Second Amendment rights of all law-abiding Americans. Friends of NRA is a grassroots fund-raising program that fosters community involvement and works locally to inspire new generations of competitive shooters.