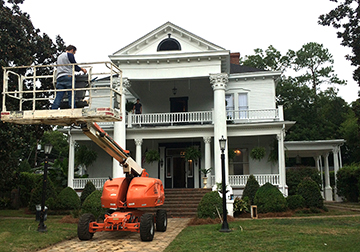 Filming the restoration at the antebellum home at 402 W. College St., Americus, for a pilot show to be aired on the popular HGTV network, was completed Friday afternoon. The program, to be shown later this fall, will be titled ‘Americus the Beautiful’ and hopefully will be part of a series on Americus’ historic structures. The restoration work began seven weeks ago, a project of EQTV, a company that contracts with HGTV, and the film crew was on hand daily to document the progress as it developed. The finished work is splendid, returning the house to a beautiful home with 21st century amenities, that include a few architectural redesigns that will be revealed when the show airs.