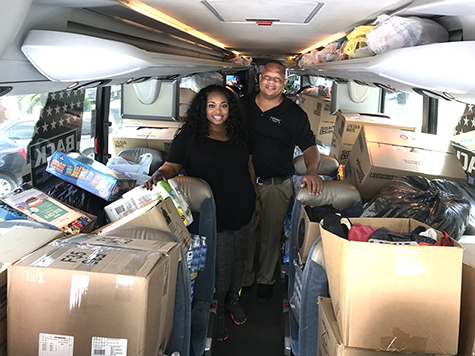 Alecia Johnson and Daron Tyson of Tystanic Travel in Americus, are shown aboard one of two large Tystanic buses loaded with donations for the Hurricane Harvey vicitms in Texas. The buses’ cargo sections are also filled with donation. Tyson, Tystanic owner, contracted with FEMA to move viciims from affected areas to safety, and decided to fill the buses with donations from the local community.

AMERICUS – Several local businesses and institutions are currently undergoing efforts to provide relief for the victims of Tropical Storm Harvey in the Texas area.
Georgia Southwestern State University (GSW) has asked members of the local community, as well as students and faculty to donate clothes (t-shirts, shorts, jackets, etc.) and shoes to the relief efforts. According to a press release from GSW, donations can be dropped off at the university’s athletic department and will be shipped to the University of Houston for distribution.
Tystanic Auto Sales and Rental is currently collecting supplies as well, including water and non-perishable foodstuffs to aid in the relief effort. Tystanic owner Daron Tyson has contracted with FEMA to take two of his large charter buses to Texas to help get people out of many areas of devastation. They are loading the buses with donations to take to the affected areas.
Donations can be dropped off at 102 U.S. Highway 19. For more information, call Daron Tyson at 229-931-6343. 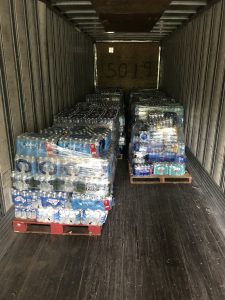 Easy Ride Auto Sales of Americus has a truck of donated water going to Harvey victims. 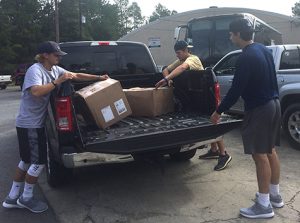 The Student-Athlete Advisory Committee (SAAC — a group of student-athletes from all the sports teams at Georgia Southwestern State University) has created a Hurricane Relief Drive for those affected by Hurricane Harvey. Specifically, Kelvin Sampson, Head’s Men’s Basketball Coach at the University of Houston, posted on social media how universities such as GSW could help with the relief. In an effort to answer his plea, GSW’s student-athletes have been collecting clothes and shoes to be sent to the University of Houston for distribution. They will continue to make shipments throughout September.

Koinonia Farms is collecting items to be donated to the victims of this disaster as well. They are currently asking for diapers, bottled water, canned foods, blankets, and personal hygiene products
Donations can be dropped off at Koinonia Farms, 1324 Ga. Highway 49 South from 1-5 p.m. Sunday through Friday and 9 a.m.-5 p.m. Saturday.
Questions should be directed to Kathleen Elizabeth at 229-924-0391.
Other donation opportunities and further information is available at www.redcross.org.