AMERICUS – Between 100 and 150 members of the Americus-Sumter County community converged on Rylander Park Thursday evening to participate in the first ever Sumter Candlelight Vigil for Unity.
The theme of the vigil was “Hate has no home here.” 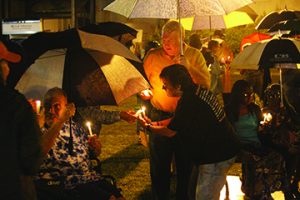 At the end of the Sumter Candlelight Vigil for Unity, participants in the event lit candles as a symbol of their desire to promote togetherness in the community.

Through the drizzling rain, participants at the event were treated to a rainbow, which stretched across the sky as the first speakers were approaching the podium.
Several community leaders addressed the crowd at the vigil, discussing the need for unity in the local community, as well as on the national and international stage. Among the speakers were Kirk Lyman-Barner, owner of Client First Insurance and co-founder of several housing ministries; Bishop Melvin McCluster, pastor of Friendship Missionary Baptist Church; Laura Bauer, national program director of Operation Family Caregiver at the Rosalynn Carter Institute for Caregiving; Jody Wade, president of the Americus-Sumter Fuller Center for Housing; Pastor George Edge, pastor of the Restoration Church of Americus and manager of the Housing Authority of Americus; Raven Payne, a faculty member at South Georgia Technical College; and Norman Race, a member of the local community. 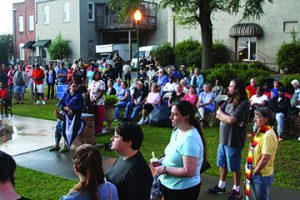 Nearly 150 local citizens came together on Aug. 31 for the Sumter Candlelight Vigil for Unit.

Each of the speakers stressed the importance of members of the community working together toward a common goal of unity and fellowship.
Musical performances were also provided by Todd Lunnebourg, owner of TL Guitars in Americus; Ladaisha Stone, a student at Americus-Sumter High School and a member of the Americus Holiness Pentecostal Church; David Ewing, a former professor at Georgia Southwestern State University; and Nile Yearby, minister of music at Friendship Missionary Baptist Church.
At the conclusion of the vigil, members of the audience lit candles from a single flame, symbolizing the need to spread the message that community members should work together toward a common goal.
The event’s principal organizer, Robin Humphries, spoke with the Times-Recorder after the vigil.
“I feel like it went absolutely perfectly, even with the rain,” Humphries said. “We even had a rainbow show up in the sky in the beginning of the event. It couldn’t have gone any better.”
Asked if she would like to work toward holding more events like this in the future, Humphries responded, “I would like to see more events like this take place in Americus and Sumter County. The idea was that this would be the beginning of a series of events in which we can open up a continuing dialogue. We want members of the community to be able to have these important conversations in a variety of different settings.
“I’m very thankful for all of the people that showed up, not just physically, but also in spirit; all of those who decided to show love,” she concluded. 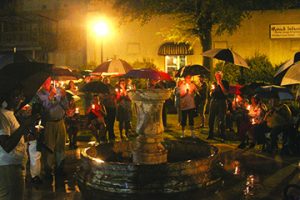 Participants in the Candlelight Vigil for Unity lit candles in spite of the rain.

She also stated that the event would not have been possible without the efforts of several locals, including Lyman-Barner, Rachel Moir, and Americus Police Chief Mark Scott, among many others.
Initially, the event was scheduled to take place the prior week. The group’s original permit application for the event was delayed by the city due to concerns that such short notice could create logistical issues.
“[Police Chief Scott] was very helpful,” Humphries added. “He met with a group of our organizers to have a discussion about obtaining the permit … Having a little extra time also helped us to better organize the speakers and performers and reach out to churches and other organizations.”
The chief was in attendance. The Americus Police Department provided security at the event.
The event was organized in response to the recent events in Charlottesville, Va., in which clashes between protesters and counter-protesters left one woman dead and several others severely injured.
A flyer, distributed prior to the vigil stated, “In solidarity with the community of Charlottesville, we invite you to our town community gathering of peace, mourning, love, and unity. We stand for diversity in humanity, and we invite you to stand with us. Hate has no home here. All are welcome.”

FCS’ Gerlach among state Teacher of the Year finalists