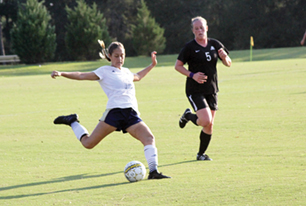 MICHAEL MURRAY I ATR: GSW’s Shelbie Bills boots the ball past a visiting defender on Sept. 13 in Americus.

AMERICUS – The Georgia Southwestern State University women’s soccer team fell 4-0 to Southern Wesleyan University Wednesday in front of a crowd of 124 at Hurricane Field.
The Warriors (2-2-0) were paced by two second half goals from sophomore midfielder Ashley Romanowski. Scoring leader Rachel Curtis accounted for two assists and put away the fourth and final goal for SWU, her fourth score of the season.
GSW was outshot 22-9 by the Warriors, including an 8-1 advantage in corner kicks. The Lady Canes (0-3-0) were led by three shots from junior midfielder Shelbie Mills, followed by two from forward Shatyriah Crawford, and one apiece from Jessica Bingham, Ella Hawkins, Haley West, and Avery Heid.
The Lady Canes had their two best chances to score in the second half when Hawkins received the ball in space before her shot was saved by goalkeeper, Courtney McNeill, and an effort from distance by Crawford just missed off the crossbar.
Junior goalkeeper Sammie Conley recorded nine saves on 13 shots on goal for the Lady Canes.
Up next, the Lady Canes face Spring Hill College at Hurricane Field on Sept 20. That game will be followed by the Peach Belt Conference opener Sept 23 at USC Aiken. 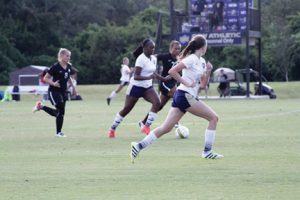 MICHAEL MURRAY I ATR:
GSW’s Shatyriah Crawford (8) dribbles the ball down the pitch as Miranda Taylor (14) provides support during the LAdy Hurricanes’ Sept. 13 tilt against Southern Wesleyan in Americus. 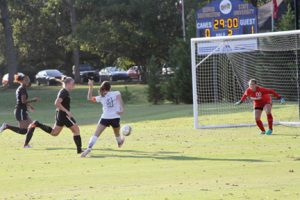 MICHAEL MURRAY I ATR:
GSW’s Ella Hawkins takes a shot on the goal as Southern Wesleyan goalkeeper, Courtney McNeill, prepares to defend the net on Sept. 13 in Americus.