‘Can do’ attitude gets the job done 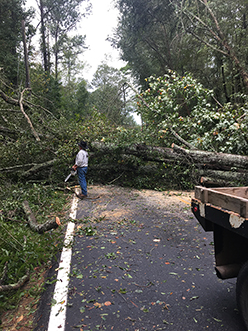 AMERICUS — Wanda and Ivan Minks of Barnesville came to Americus on Tuesday after tropical storm Irma had done her thing with Sumter County. They were trying to check on Ivan’s mother who lives on Patton Drive in the Lake Collins area. 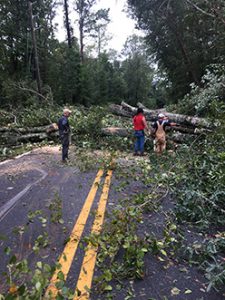 When they saw that three trees were blocking a dead-end on Morris Drive, Ivan got his chainsaw out of his truck and went to work.
Wanda said that two men appeared and saw a need, and responded without hesitation. Locals 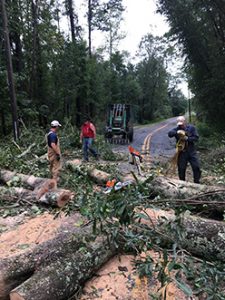 Mark Collier and Leo Puioliot brought their chainsaws.
Jim Buchanan, a resident of the neighborhood, came driving his John Deere tractor in to help. The men worked for two hours to clear the trees from the roadway. “Thanks to the efforts of these four men, the neighborhood was rescued from Irma’s wrath,” Wanda said. Ivan’s mother was no longer “captive” in her house. 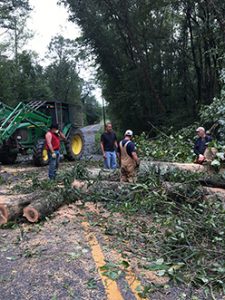 There were other such stories as well about people lending aid to one another.
Over on Sharon Circle in Americus, the power went out at 5:48 a.m. Monday. Later, as high winds and heavy rainfall pounded the area, two trees fell in the yard of Martin J. and Uvonda D. Mitchell, who are both school teachers. On Tuesday morning, the Mitchells’ neighbors arrived and cut up the 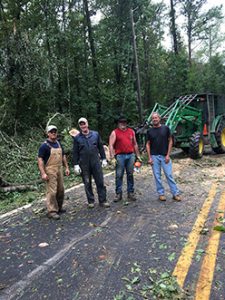 fallen trees and moved debris from their yard to the curb. On Wednesday and Thursday, smaller pieces were cut so the debris could be hauled away. Jerry Turner was one of those neighbors. He called the story to the attention of the Times-Recorder
If you have stories like this to share, please send to beth.alston@americustimesrecorder.com and if you have photos, please send those as well.