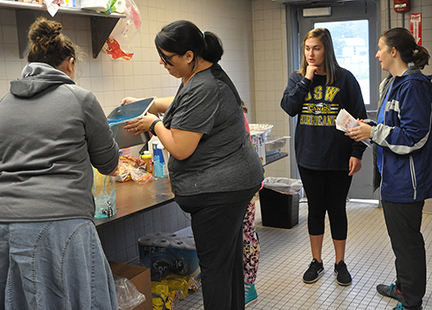 Volunteers prepare food to be served to first responders at the Sumter County Emergency Operations Center during and after Irma.

AMERICUS – Several heads of County Departments addressed the Sumter County Board of Commissioners at the Sumter County Courthouse on Sept. 12 to update the board on their respective departments’ responses to the damage wreaked by Tropical Storm Irma the previous day.
Nigel Poole, director of the Sumter County Emergency Management Agency (EMA), addressed the commissioners at the beginning of the meeting.
“The latest reports came in today. They were saying that we had anywhere from 3.14 to 2.95 [inches of rain]. In some reports, it was as low as 2.30,” Poole began. “We started, today, doing damage assessments. Our CERT (community emergency response team) team has … blossomed, which I‘ll say is a good thing coming out of a disaster … We have gone from having, possible, four people on our CERT team to, now, 20 active registered volunteers. Today, they just keep pouring in, which is great.
“I am happy to report that Sumter County has fared better than we were anticipating,” Poole continued. “I think that we did a good job of preparing our citizens for this in advance; getting out information timely. We only had about four or five people that didn’t have [oxygen] for their home oxygen tanks. We had to open a shelter really quickly last night. It was a Good Samaritan shelter. Red Cross was at capacity and could not provide any more staff to open up a Red Cross shelter, so we [opened one] out at Life Point Church.”
Poole went on to say that CERT members moved cots into the facility and volunteers provided food.
“We set up a shelter for one night … We were happy to only have to have it open for one night. Five people took refuge at the shelter. That’s five citizens that we were happy that we could provide for.”
Poole then discussed the damage assessments.
“We had volunteers go out two by two today and do ‘dashboard reviews’,” he said, explaining that a dashboard review consists of an assessor driving to a residence that has reported damage and evaluating whether the property is considered “major, minor, affected, or destroyed.”
Poole went on to say that, at that point, no properties in Sumter County had been classified as destroyed.
“We had lots of affected [properties], which is the best-case scenario,” Poole continued. “We must be living right in Sumter County.”
At the end of his address, Poole sang the praises of the various departments that had worked together to ensure the safety of the county’s residents during the storm.
“I cannot speak highly enough about the Sumter County Fire Department and their willingness to get out there and just get the job done,” Poole said. “They came in every single time. We were able to help them and provide relief. Those guys didn’t complain one time. They went out there and did their jobs.
“[County] Public Works went out there and got stuff done faster than the calls came in,” Poole added. “It was amazing to watch.”
He went on to praise the city’s GIS department.
“We couldn’t have gotten half of the work that we did done without Beverly Butcher sitting out there and doing that work,” he said. “She was able to map every single call that came in through the radio.”
Poole concluded his report, saying that the EMA department had learned a great deal throughout the ordeal about how to more efficiently ensure the safety of county citizens in the case of another potential disaster.
Later in the meeting, Sumter County Public Works Director, Frank Whitaker, echoed Poole’s praises.
“The coordination between the city, the county, the State Patrol, and the ambulance service was remarkable,” Whitaker said. “At times, the DOT (Department of Transportation) told us that they weren’t going to go out and work in that weather. The State Patrol asked us to go out and open [Highways] 280, 27, and 49. We did that and the City of Americus took care of some of our trees in the Lake Collins area. Everybody was working together. It just shows what this community can do if we all work together for one common purpose.
“There were no boundaries,” he continued. “There was no hierarchy. If something came up, somebody handled it. It might not have been their area, but somebody handled it. I’m very proud of that.”
Whitaker went on to say that there were still some roads blocked at that time that the Public Works Department had not been able to access yet, adding that it might take as many as two days to completely clear all of the roads.
“We’re making great progress,” he concluded.
Near the end of the meeting, Sumter County Fire and Rescue Chief, John Ekaitis, addressed the commissioners as well.
“I’d like to echo what Frank [Whitaker] and Nigel [Poole] said,” Ekaitis began. “We worked for 12-14 hours straight. We were out there cutting trees when nobody else was and … we have to give kudos to all of the career firefighters and volunteers. We had volunteers that actually stayed at each of the stations. A lot of volunteers used their own [tools] to help clear the roads. We’re very proud of that. We had over 100 responses within a 14-hour period … We worked together and everything was absolutely great.”

Americus Mayor Barry Blount praised the city’s personnel for their response during the storm near the conclusion of the agenda-setting meeting of Council Thursday. He commended the city’s public works, fire and police chiefs, first responders, “and the entire city organization” for their efforts. Americus Fire & Emergency services had 100 calls as a result of the storm.

Magnolia Manor was without electricity from Monday until Wednesday night. The retirement home and the nursing center continued operations using generators before the nursing center’s power was restored. Steve Vinson, senior vice president for communications at Magnolia Manor, said they housed residents from its Coastal Georgia campuses, at the Americus campus as well, as its facilities in Moultrie, Buena Vista and Columbus, about 350 in all. They were returned by Friday morning.
“Our emergency plan works,” Vinson said. “Hurricane Matthew was a rehearsal.” He said they had crews on the ground on all their campuses after the storm assessing damages, and working to clear up debris.