Sumter board of commissioners meets ‘Sparky’ 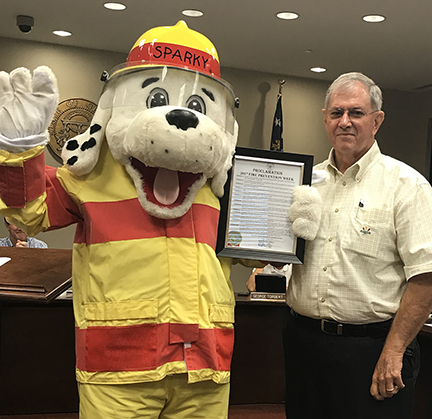 ‘Sparky,’ the fire dog is shown with Sumter County Board of Commissioners Chairman Randy Howard.

AMERICUS – The Sumter County Board of Commissioners met for their monthly regular meeting on Sept. 19 at the Sumter County Courthouse.
At the beginning of the meeting, the commissioners adjourned for a 45-minute closed session to discuss litigation and appointments.
When the board members returned, board chairman, Randy Howard, issued a proclamation declaring the week of Oct. 8-14 Fire Prevention Week.
Sumter County Fire and Rescue’s mascot, “Sparky” accepted the proclamation on behalf of the department.
The commissioners then heard from local citizen, Craig Walker, who expressed his dissatisfaction with the county’s maintenance of a portion of the roadside on Buttercup Lane. Sumter County Public Works Director, Frank Whitaker, advised Walker that the county has already purchased topsoil to complete the project, though completion had been postponed because higher priority needs, including road maintenance, had arisen. Howard then asked county administrator, Bill Twomey, to contact Walker and schedule a visit to the site and recommend a course of action.
Clearly unsatisfied with the board’s response, Walker left the meeting and returned a few minutes later with a sign declaring Sumter County, “The great Satan of Georgia”, which he displayed through the remainder of the meeting.
Twomey then led the board in a discussion on how best to deal with the amount of debris left in the county created in the wake of Tropical Storm Irma, which affected the community the prior week. Twomey asked the board to approve a measure that will allow the community to create a staging area, where the debris can be sorted and disposed of properly. He advised the board that County Clerk, Rayetta Floyd, had reviewed the county’s ordinances for creating a staging site and went on to say that Whitaker had received approval from the Environmental Protection Division to designate a site. Twomey stated that a location for the staging area had not been established at that point, though discussions were underway. The board approved Twomey’s request.
Sumter County Emergency Management Agency director, Nigel Poole, asked the board to approve a request for proposal for a mass notification system. Poole advised the commissioners that the new system would be capable of alerting citizens of the county of potentially dangerous conditions in real time, thus allowing members of the community time to make preparations. Poole also stated that the system could be utilized by other departments as well, on an opt-in basis, to notify citizens of events happening in the area.
The commissioners then discussed a proposal to repeal Section 2-2 of Article 1 of Chapter 2 of the Sumter County Code of Ordinances (SCCO) relating to the application fees for indigent defense.
County attorney, Kimberly Reid led the discussion, advising the board that the section was inconsistent with other portions of the SCCO. She advised the board that, if left intact, the commissioners would likely have to address the discrepancy in future contracts.
“I think that rather than address it time after time after time, it would be the proper thing to do,” said Twomey, adding that the issue should be addressed once and for all, rather than having Reid add wording to future contracts to ensure that the documents are accurate and in compliance.
The commissioners also discussed the approval of an agreement with the Georgia Department of Transportation for the reimbursement for a portion of the costs of construction of an eight-unit hangar.