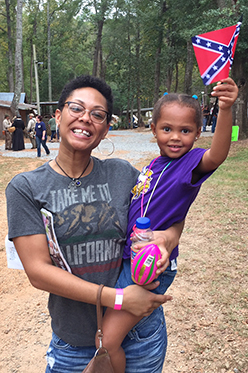 Stephanie Royle and her daughter Malaya enjoyed the fair.

ANDERSONVILLE — Pleasant weather, although hot and humid, graced the 41st annual Andersonville Historic Fair, at least for half of it. The popular event was held Saturday and Sunday in the downtown portion of the quaint Civil War Village.
One fair-goer, Stephanie Royle of Ellaville, said she attended because she “love(s) to be taken back in history.”
Apparently, so do thousands of other area residents. Thousands flooded into town to enjoy   crafts, food, rides, a parade, and of course, the ever-popular battle re-enactments which drew huge crowds Saturday, ahead of Sunday’s predicted rain. Royle and her daughter Malaya were among them, especially enjoying the “Gunslingers” shoot-out, which included Royle’s father. “I want to make sure Malaya is culturally well-rounded,” Royle said, noting this fair is a slice of Americana that shouldn’t be missed.
For the parade, area dignitaries like Congressman Sanford Bishop made an appearance, along with several beauty queens, Confederate soldiers, and the Southland Academy Raider band. Andersonville’s main street was packed with spectators enjoying candy being thrown from Bishop’s float, classic cars, motorcycles, POW groups, bands, and Confederate and Union soldiers, along with women in period dress to accentuate the weekend’s theme. 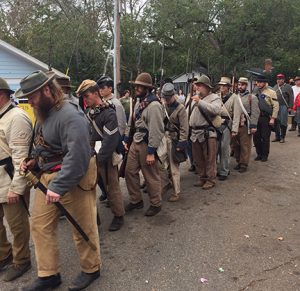 Reenactors were everywhere during the 41st annual Andersonville Historic Fair.

In addition to attendees like Royle, some of the fair’s participants were there to serve. Nathan Terry, of Americus, and Micah Hutcherson, of Albany, worked in the ticket booth with their Civil Air Patrol commander Greg Frich. Terry is a JROTC cadet at Americus-Sumter High School, and Hutcherson is home-schooled in Albany; both gave up their Saturday to serve at the fair. Other service organizations included health screenings and booths sharing Civil War history information and artifacts.