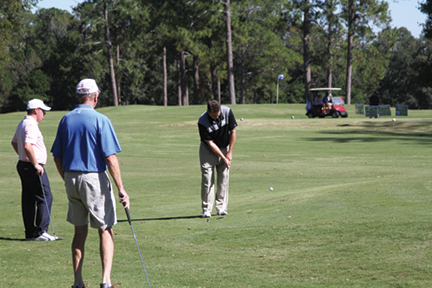 MICHAEL MURRAY I ATR: GSW president, Neal Weaver, chips onto the 18th green during the President’s Classic golf tournament on Oct. 20 in Americus.

AMERICUS – Georgia Southwestern State University (GSW) held the institution’s President’s Classic Golf Tournament on Oct. 20 at the Griffin Bell Golf Links in Americus. Proceeds from the event will go to benefit the university’s athletic department.
The four-player scramble tournament saw dozens of individuals from all over the community come out to enjoy the sunny weather and support the university.
The team sponsored by Roland, Denham, and Greer won first-place honors in the tournament. The team sponsored by Tape Specialists of Georgia earned a second-place finish and the team sponsored by Arrow Pest Control won third place.
First-year GSW president, Neal Weaver spoke with the Times-Recorder at the tournament, saying, “It’s a fantastic event. The community support for what we’re doing out here today has been fantastic. To drive around the golf course and see all the sponsor signs… It’s just wonderful to see the support for the university.”
We’re trying to raise some money to help the athletic program,” Weaver continued. “That’s one of the things that really helps to drive the reputation and the image of the institution as well as provide great opportunities for young men and women who have a skill or talent that they want to continue to develop while going to school and earning a degree… The folks that are out here today are helping the students, but they’re also helping the university expand our reputation and grow… Hopefully, it will help develop the institution further.
Asked how he played that afternoon, Weaver joked, “My team played great because I had three really good players with me.”
“We had a lot of fun,” he concluded. “I really enjoyed it and was glad to meet some of our honorees. I was playing with two of the folks that are going into our Alumni Hall of Fame later on tonight. It’s great fun to meet them. I really enjoyed spending some time with some folks who graduated from the university and have gone on to do great things…” 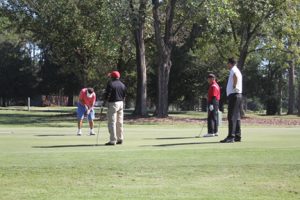