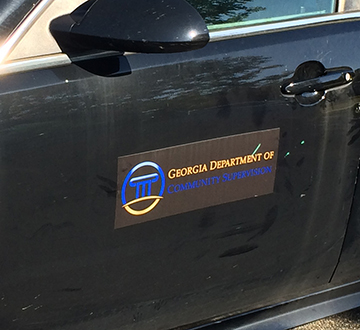 AMERICUS — The Georgia Department of Community Supervision, which oversees both parole and probation in the state, conducted a roundup that began around 5 a.m. Wednesday in Sumter County.
The agency was assisted by the Americus Police Department, Sumter County Sheriff’s Office, the federal Bureau of Alcohol, Tobacco, Firearms and Explosives, the U.S. Marshals Service, the Georgia Bureau of Investigation, and the Georgia State Patrol, according to James Hill, public information officer for Community Supervision.
Hill said that out of roughly 30 active warrants, 10 individuals were taken into custody Wednesday, charged with parole or probation violation and other crimes.
“That’s a successful day,” Hill told the Times-Recorder. “We also gained information and intel on others.”
The operation consisted of about 75 individuals from the agencies mentioned above which were split into to five or six teams, according to Hill.
The Georgia Department of Community Supervision was created by the Georgia General Assembly in 2015. The department is tasked with supervision of all adult felony offenders and some misdemeanor offenders, previously overseen by pardons/parole and corrections. The Georgia Department of Pardons and Parole focuses on clemency for and release of offenders, while the Georgia Department of Corrections deals with incarceration and rehabilitation of offenders.

Arrest made in shooting outside night club

By Beth Alston AMERICUS — Authorities have made an arrest in the Oct. 8 shooting death outside a local night... read more