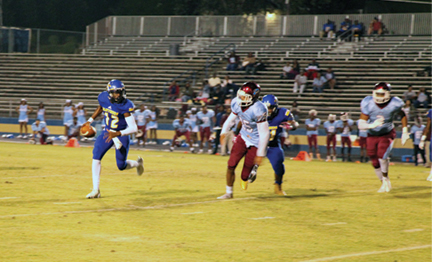 PHOTO BY CARLA CLADD: ASHS quarterback, Kierston Harvey (12), scans the field for an open receiver during the Panthers’ Nov. 4 tilt against the Carver High Tigers in Americus.

AMERICUS – The Friday-night lights shined bright at Alton Shell Stadium on the evening of Nov. 4, but not as bright as the seniors of the Americus-Sumter High School (ASHS) football team.
That night, the 1-AAAA region champion ASHS Panthers took the field on senior night, looking to end the regular season with a bang in their regular-season closer against the Carver High School Tigers of Columbus, and they did just that.
The Panthers earned a 27-16 victory in the match to bring their regular season to a close with an overall record of 8-2. The Panthers are currently undefeated in Region 1-AAAA competition after seven games. As a result, the Panthers will have the opportunity to host the first round of the Georgia High School Association (GHSA) state playoffs in Americus on Nov. 10.
With the defeat, the Tigers fall to 3-7 on the season. Their region record is currently 3-4.
ASHS quarterback, Keirston Harvey, got things started early on by finding senior receiver, Braelin Williams, behind the Carver secondary for a big first down. Williams’ reception marked the first time that the ball was pushed past midfield on the night.
On fourth down, Harvey went on to connect with senior, AJ Payne, to set up first and goal for the mighty Panthers. A few plays later, Payne pulled in a one-handed touchdown pass off the fade route to put up the first points of the night, but the PAT was blocked, leaving the Panthers with a 6-0 lead.
On the ensuing kickoff, Americus attempted an onside kick and recovered to keep the momentum up. A big run by Kobe Lewis then set up first and goal for the Panthers. Two plays, senior Darren Davis caught a touchdown pass and the Panthers made up for lost ground with a two-point conversion to extend the lead to 14-0.
After a few stalled drives, the Panther offense went back to what works best; the duo of Harvey and Williams. A play action set up by Lewis allowed Harvey to find Williams cruising down the field in stride for an 88 yard touchdown reception.
The ASHS defense soon got involved with the scoring parade as senior linebacker, Christian Mable, scooped up a fumble and rumbled into the end zone, sending the Panthers into the locker room with a 27-0 lead for the halftime break.
The fireworks stopped for the Panthers when play resumed, but started for the Tigers late in the fourth quarter when junior quarterback Xaiyhir Jacobs put on a show for the visiting fans, escaping pressure to launch a pair of passes downfield to put points on the board for Carver as they tried to stage a comeback. It was too little, too late, however.
The Panthers return to action to kick off the GHSA state playoffs on Nov. 10 in Americus. ASHS’ opponent in the match-up was yet-to-be determined at press time.